My family loves cold cereal. You know, the kind that is $5 a box and lasts a bit longer than 30 minutes?

However, according to a study , described in “Nourishing Traditions” by Sally Fallon, that was performed in 1960 by researchers at the University of Michigan at Ann Arbor, eighteen rats were divided into three groups. One group received cornflakes and water; a second group was given the cardboard box that the cornflakes came in and water; and the control group received rat chow and water. The rats in the control group remained in good health throughout the experiment.

The rats receiving the box became lethargic and eventually died of malnutrition. But the rats receiving cornflakes and water died before the rats that were given the box – the last cornflake rat died on the day the first box rat died. Before death the cornflake rats developed schizophrenic behavior, threw fits, bit each other and finally went into convulsions.

Autopsy revealed dysfunction of the pancreas, liver and kidneys and degeneration of the nerves in the spine – all signs of “insulin shock.” The startling conclusion of this study is that there is more nourishment in the box that cold breakfast cereals come in than in the cereals themselves.

This wasn’t something I wanted to continue to feed my children.  I had to change what I was doing.  So, enter in homemade granola! We love adding in the flavor of dried strawberries and coconut to give it a summery, tropical taste.

Making your own homemade granola isn’t hard at all.

You can find homemade granola recipes just about anywhere on the internet, in cookbooks, and even just by asking friends.  The problem that I came across was trying to find a good fit for our family.

I  tried several different recipes, with no real success. The homemade granola recipes were either too sweet, not sweet enough, to soft, not soft enough, to big of ‘globs”

Finally, I hit success with this strawberry granola recipe!

Get a delicious strawberry granola yogurt recipe here, too! 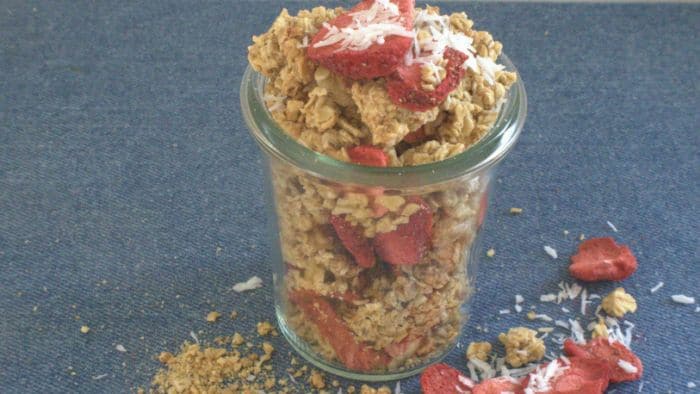 Ingredients For Strawberry Granola With Coconut

Put your homemade granola together:

I can’t tell you how long this will last, as my family usually gobbles this up within 3 days.  I am sure that it could last at least a week, though.  How do you make your granola? Be sure to pin this for later!