How Throwing Food in the Trash Saved Me Money

I can feel the gasps of air being sucked in by all my frugal friends as they re-read the title to make sure they read it right.

Stay with me, though, and I’ll explain, mmmmkay? 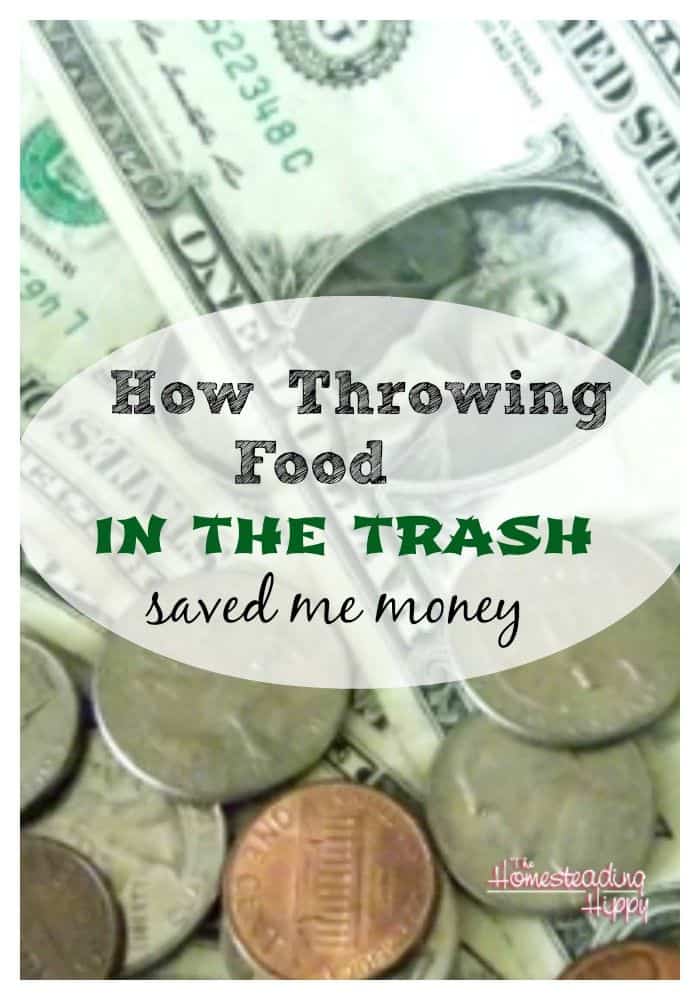 See, I live in this part of the country where we have a lot of Amish. Great people, great business owners. Many of them own “dented can” stores, where they buy the castoffs from regular grocery stores and sell them at a discounted price. They can be boxed food that is “out of date” (since when does dried pasta have an expiration date?) or things from a retail store closing, cans with small dents, ect.

The best part is, that you can find some real deals there. Like this one time, I found boxes of Kcups for my keurig for only $2! And, they have dried pasta for $.40 a box, and dried beans for $.40 a bag. You can find a bargain on nearly anything, if you are willing to dig and look past the dates on somethings. And, if there is a spice you want to try but weren’t sure about it, like Chinese 5 spice, then $.25 a bottle is pretty good if it doesn’t work out.

The problem is that you can overload yourself with good deals. I got this anchovy paste for $.25 a tube there, and I got four tubes. $1 isn’t bad, right? And I was sure I was gonna make homemade ceasar dressing, or some other thing with it. It was a total bargain! Along with the canned salmon for $.50 a can that I got four cans of…

So, each week, I would make my menu plan and incorporate recipes that included canned salmon and anchovy paste. (did I mention that my husband hates canned salmon and I knew this before I bought it and did it anyway??) And each week, I would buy things to go with these two wretched items, and some times the price of those “extras” was steep. Lemons off season, for example.

And each week, my menu including homemade cesear dressing and salmon patties wouldn’t work out for one reason or another. I didn’t plan carefully enough, I made something else that night, my daughter used my lemons making lemonade…you get the idea, right? And each week I didn’t use those items, my guilt would build. Overwhelming, crushing, agonizing guilt.

One day, I decided to declutter my kitchen. The weather was warmish, and I could actually open my windows. And, when I declutter, I can get “brutal”. So, I started cleaning out cabinets and emptying castoffs into my “goodwill” box. I then came across the cabinet that held 2 cans of canned salmon, and 4 little tubes of anchovy paste. There they were, mocking me. “ha ha, you’ll never be able to get rid of us”, they laughed. (yeah, my food talks, doesn’t yours?)

And, with all the frugalness pushed aside for a moment, I picked up the six items, and held them in my hand. I thought about keeping them, and trying again. But, then I reminded myself of all the times I bought more expensive items to go with these, items I might not normally use. And the canned salmon and anchovy paste remained. So, with a final sigh, I did the unthinkable. I tossed them in the trash can.** I felt an immediate release of guilt once I did, because I could finally let go.

And, no more salmon patties on the menu makes my hubby a bit more happy.

Are you holding on to something that is costing you more than it’s worth?

** I couldn’t donate the food to the food bank, since the “expiration date” was past at this point, so tossing it out was my only option**