Store-bought vegetables can add a significant amount of flavor, color and texture to pre-packaged food or family meals. But there are several reasons why you may want to re-consider reaching for that next tomato, broccoli crown, or head of lettuce.

At a glance, the presentation of veggies at the store is appealing. Colors are often vibrant and some stores have display racks that give the feel of a farmers market. So why bother with a weekly farmers market in your area or sewing your own garden vegetables?

The Inconvenient Truth of Convenience

Convenient shopping has been a mainstay for many people since grocery stores became popular in the mid-50s across the United States. People in northern states could enjoy fruits and vegetables that would otherwise be out of season or impossible to obtain depending on the planting zone.

People in southern states had access to some of the winter-hearty fruits or vegetables that rarely produced down south. But with the passage of time and increased demand, the supply chains began to struggle. Small, local farms were ousted in favor of larger production facilities. Quality control went from the farmers hand to the hand of an unskilled laborer or inspector along the production line. To the consumer, convenience became the new expectation.

Few people realize how an avocado, an orange, or a brussels sprout winds up in their super market in mid-winter as fresh as it was just hand-picked. As long as it’s there, there’s no reason to care. Instead of farm to table, It’s farm to workhand or machine, to production facility, to packaging warehouse, to trucking company, to massive distribution warehouse, to shopping center, to stockroom and finally to the shelf.

Now, by the time produce hits the stand, it has been handled by dozens of people – not including those who pick and inspect each item before putting it back on the display. Mothers who just wiped their children’s’ faces.

Fathers who just left work with dirt beneath their nails. Health-conscious foodies who pluck and prune and sort through each piece looking for the best one. The person who didn’t wash his or her hands before leaving the restroom.

This supply chain poses a serious health and safety risk to consumers on an everyday basis.

In 2018, the FDA had reported a 300 percent increase in cases of food borne outbreaks across the United States compared outbreaks in 2017. Cases in 2018 included 10 outbreaks of Salmonella, 3 E-coli outbreaks, 2 outbreaks of Cyclospora and one outbreak each involving crab meat from Venezuela, raw oysters from Canada, and a B. cepacian Complex linked to a no-rinse cleansing foam typically used in medical facilities. (CDC Outbreaks)

Of the 18 outbreaks last year, 7 were related to produce mishandling. That’s nearly half. Remember the big romaine recall? A total of 511 recorded cases of Cyclospora were documented from the Fresh Express salad mixes available at McDonalds locations across the country. E-coli in leafy greens? Salmonella in sprouts? You bet. (CDC Recalls)

Poor sanitation is the main cause of recalls according to the CDC. While many of these outbreaks could have been prevented through proper hygiene and food washing, the threefold increase in outbreaks demonstrates a lack of quality control when transferring or handling produce. The best way to prevent infection is by following proper hygiene even if your produce appears clean. (CDC Guidance Food Handling Safety Canadian Version)

Typically, consumers are led to believe that packaged food is clean. “Organic,” “All-Natural” and “Pre-Washed” are terms that convey foods are safer to eat. This is not always the case. It’s even farther from the truth when it comes to produce.

Year over year, regardless of the controls in place for safe food handling and training, produce has been the cause of some form of outbreak at least once per year for the past 8 years according to FDA outbreak data. It’s not a matter of if an outbreak will happen – but when. And there’s no telling how severe or widespread the next outbreak will be, or what kind of fruit or vegetable will be the culprit.

Behind the Veil of Not-So-Super Markets

Each year, recalls and outbreaks from food-borne illness amount to millions of dollars of lost profit, wasted production and consumer health risk. At the heart of this risk is a false sense of convenience portrayed by grocers. So how do they recover from lost sales?

The short answer is you. At a glance, those bright colors coming from the produce section are stunning. Greens, reds, yellows and more. But when you take that tomato home – and wash it – you may find the taste less than appealing. Bland at best. It’s confusing because it looked so good on the shelf, right?

The lighting, the layout, the light misters along the wall – all of it is designed to make a sale. Look again. Those perfectly ripe tomatoes are a little too perfect. Same with the uniform carrots, broccoli, celery and on and on. You may enter to buy a product, but you are sold something that could be vastly different, genetically modified, and far from fresh.

Behind That Perfect Shine

If you intended to buy an apple at the store 50 years ago, you would have only two months to have access to apples on the shelves. Now, apples are available year-round. As an example, apples are often harvested in the months of September and August, then washed, processed, waxed, and kept in cold storage for 12-14 months. But this is only one fruit. Many fruits and vegetables undergo similar chemical processing to keep them looking fresh despite their harvest date or origin.

You’re not just buying an apple at the store any more. You’re likely buying an apple and all the chemicals along the way. As the old adage goes “If you can’t pronounce it, don’t eat it.” One apple isn’t just an ordinary apple – it comes with the likely possibility of having been cleaned, treated or preserved with any one of these following FDA-approved chemicals:

Many of these chemicals help to remove the harmful, often carcinogenic or otherwise toxic, properties related to spray-applied pesticides, parasites and bacteria. Some are designed to remain on produce to enhance the appearance and help to retain a longer shelf life.

However, some of these chemicals have been linked to reproductive problems, cancers and other negative long-term health effects. And sometimes, even their protective features still don’t fix some problems that lurk on the surface.

Thirty years ago, attempts to improve the look and appeal of produce turned deadly. An outbreak of Legionnaires Disease in Louisiana was linked to a set of misters used to spray produce. Bystanders who got close enough to misters were affected by inhaling the mists and the outbreak infected 33 people in less than a month. Two people died from pneumonia during the outbreak (LD-CDC).

While steps have been taken to prevent a similar outbreak, new methods of produce production have their own problems. Advancements in genetic modifications, antibiotics and farming practices has helped to create an ample supply of consistent, predictable food.

But a side effect of these advancements are bacteria with stronger resistance to antimicrobial chemicals. This means that the produce you think you are getting can actually be more harmful than the average person realizes.

On average, 410,000 Americans are treated annually as a result of infections from resistant bacteria tied to food borne illnesses like Salmonella and Campylobacter (CDC). Some produce studies have found that your top shelf produce pick may as well have been on a shelf in the bathroom or rolling on the floor because of how much bacteria is present on the surface.

Ultimately, when it comes to produce, it’s best to consider the source.

You may go to your local grocery store to get your produce, but before it even hits the shelf it has been handled, processed, treated by any number of hands, holding patterns and chemicals. Your best defense is to approach your own yard with a new perspective. With even limited space, you can produce many of the fruits and vegetables you’d normally pick through in the produce aisle. And if you can’t, you’ll likely find yourself approaching that vegetable that is out of season in your area with a different perspective.

Anyone who has tilled his own soil can testify that carrots aren’t uniform, and that broccoli heads come in all different sizes. More importantly, he’ll recognize a ripe tomato on the vine and know to capture it before the wildlife does. But those windows of opportunity are limited and demonstrate how fragile truly organic produce can be.

So when the average person walks into a supermarket and sees a world of uniform produce, glowing and waxy with beads of water on the surface, the question of convenience is irrelevant. Rather, he should ask: How is it that an apple can be 12-14 months old before it hits the shelf? How fresh is a cantaloupe in February? At what point will our demand for convenience destroy quality altogether?

By taking the future of food into your own hands, you can re-establish quality and share it with your family. Whether it starts as a planter pot or a garden plot, taking on a garden and tasting fresh produce that is actually fresh will change your life completely.

Sowing from seed does take work and practice, and it is rarely convenient. But if managed properly, you can have better tasting produce at your own hand that is much safer than the risk of consuming something handled by dozens of other people, dipped or sprayed by dozens of chemicals, and can still potentially harbor bacteria that has survived even the harshest of chemicals. 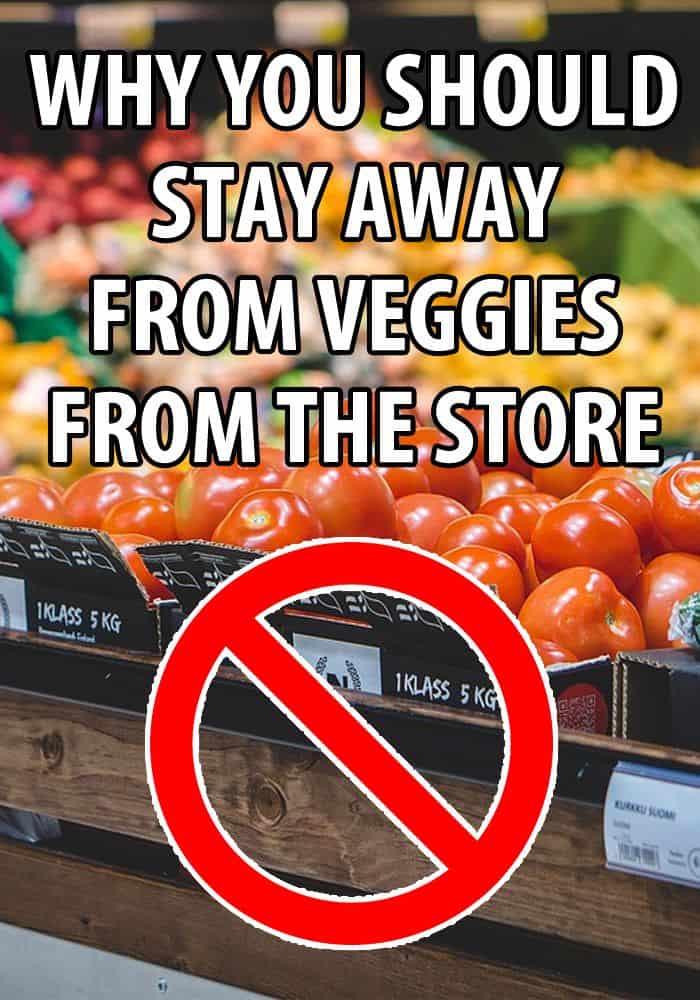 D. Ryan Buford is a professionally trained writer and journalist from the Pacific Northwest region of the United States. He currently hosts “The Next Generation,” a live, weekly internet radio show on Prepper Broadcasting Network that focuses on parenting and preparedness.

As an advocate of the preparedness and homesteading world, Ryan left behind a successful, fast-paced urban job for a more sustainable life among farm fields, wildlife and family. In addition to leading a self-sufficient life, he writes as a freelancer and maintains a blog and magazine at www.dryanbuford.com.