I love internet memes. They are usually so “informative” about any opinion, and are just a few words with a fun picture to convey their meaning.

And, usually, they elicit a laugh, smile, or full out belly roar. Sometimes, I will share them on my facebook page. Some can provoke thought, inspire action toward change, or even just evoke emotions you never thought you had…like anger.

I am sure that most of you have seen this meme before, right? I usually skipped over it, since we don’t eat out at McDonald’s, and I thought it never would apply to me anyway. But, once I really looked at it, it almost made my blood boil.

Why did it bother me? Well, let’s really look at this picture for a moment.

The idea behind it is that eating at home is far healthier and cheaper than a meal at McDonald’s. And, truly, I fully agree with that. But, for whom is this supposed to be?

Is this picture of “reality” supposed to be targeted toward those of us who already do most of the meal preparation at home, who understand that whole, real foods are far healthier than processed junk? Or is this meme targeted toward those who might not really know? The single mother of 3 who really never learned how to cook beyond opening a box of frozen lasagna and tossing it into the microwave? The family that is struggling to make ends meet each month? What about the college students who are living off of fast food, ramen noodles and pizza delivery?

Let me start with some back story on this.

*I* was one of those types, the ones who didn’t know how to cook beyond opening a can and tossing some packaged meal into the microwave. My mother taught me to cook, but it was really how to open frozen fish sticks, place them on a tray and add milk, butter and dried cheese to noodles.

Not exactly gourmet, but we were eating. I would take my family out to dinner at a fast food restaurant, and felt good about “decent food” vs. eating junk food like chips or candy. That meme was pointed at who I was.

So, why am I upset about this meme?

Well, let’s start with the fact that they say the average family of 4 eats 2 big macs with fries, a 6 piece chicken nugget, cheeseburger, 2 small fries and drinks and is satisfied. Now, I may have unusual children here, but that wouldn’t even begin to fill them up.

When my daughter was 7, she could put away 20 chicken nuggets herself! My son could easily pack away 2 big macs by himself as well. So, what family of 4 are they feeding? (no, my kids are NOT overweight at all either) Now that they are working out 12-15 hours a week at TaeKwonDo, they would laugh at me if I said they had to eat just one big mac, fries and drink for a meal.

Again, I am sure that my family is a bit different than others…maybe the average family of 4 COULD eat that and be happy and full.

The next thing that kind of bugs me about this meme is that they aren’t comparing apples to apples here.

If I take my family out for dinner, and we get burgers, it’s because we want BURGERS. Plain and simple. We don’t want chicken. I get that eating the chicken is healthier in many people’s eyes, yada yada yada. So, what if we decided to make burgers and fries at home for our family of 4? Let’s compare apples to apples here. I wanted to know how much cheaper, if at all, it would be to make that cheeseburger and fries dinner at home.

Now, we are going to take the GMO/chemical factor out here as it goes without saying that homemade and controlling the ingredients by making homemade burgers is healthier. But, is it cheaper? I wanted to know so I went to my local Aldi grocery store and checked out the prices.

Total for this hamburger and fries meal is $5.39.

Did we forget the milk?

Well, add in another $3.99 for that gallon. We just spent $16.02. Sure, you are going to be able to use those potatoes, condiments, and milk for another meal…you’ll get no argument from me on that.

Let’s look at that meme again.

Remember our target audience is people who most likely don’t know how to cook from scratch, or have never really tasted homemade food. You see in the bottom picture a delicious roasted chicken, salad greens, fried potatoes and toast triangles.

There is a bit of olive oil, a fresh lemon, salt, pepper and a quart of fresh milk, presumably skim, because you know, fat… And, they are showing how it’s $14.11 cheaper than the McDonald’s meal. Again, you aren’t going to get an argument from me that it’s far better for you.

Herein lie some of my issues.

If you are of the belief that McDonald’s constitutes food (like I used to) then you probably don’t cook much from scratch. There’s really no shame in that at all. It took me a long time to learn how to make food from home, and most of that was self taught.

They don’t teach that in schools anymore, and you can get just about any meal in quick prep style. Why cook? For those on that side of the fence, olive oil, lemon, salt and pepper are going to be foreign as seasonings on chicken. The chicken would most likely taste really bland to them.

Hey, it did to me, too at first. And, for those in that group, can you really make a lemon juice/olive oil dressing for those greens and expect your tweens or teens who are used to processed foods gobble it down? Never worked for me…I had to add some ranch or blue cheese dressing to get them used to salads at all. Green food was the enemy to them!

And, next question: In what are they cooking those potatoes?

The amount of olive oil used was painstakingly pointed out and one can assume that you are using that on the chicken and greens. There’s really not a lot left to use on the potatoes.

Okay, so we baked them and cut them up. Still, with just salt and pepper and a bit of olive oil drizzled, there isn’t a lot of flavor for those “first timers” who are having taste buds go into shock. What about butter on that toast? The thought of dry toast as a side dish would have totally grossed my kids out, and I have to admit that I wouldn’t have eaten it dry, either. But, there was no mention of anything to put on that toast.

So, let’s compare apples to apples. Again, pricing at Aldi:

Total for this meal spent is $8.47. Go ahead, I’ll wait while you check my math.

Again, you can’t buy just 1/4 of a stick of butter, or just one ounce of oil. Total spent $22.70 to get the ingredients to make this meal. Of course, we haven’t factored in the time spent on preparing the chicken, energy spent cooking said bird and doing dishes afterwards.

And, if you are like me, learning to cook a whole bird takes a bit of practice to do. You go through a lot of birds that have to be cut up and recooked, mainly due to under cooking. And, that leads to frustration and an unwillingness to keep trying (trust me on that one). I must have had to cut up at least 20 birds before I figured out the timing on cooking them whole.

So, is it really cheaper? I would have to argue that it may not be cheaper for those unused to cooking from scratch . Of course, those of us on the “real foods” side of the fence would agree it was cheaper. We would know to make broth with that carcass, maybe some potato soup, with another salad and have a few more meals out of that. But, back in the day when I didn’t know how to do that, it wouldn’t have been cheaper.

I wouldn’t have known what to do with the leftover carcass, and I would have purchased broth in the can. I would’ve just made mashed potatoes at the next meal, if I remembered that I had them. Or my kids would’ve drunk that gallon of milk at the first dinner and there would be none left over. (Aaaaahhh..those were the days…only 1 gallon consumed at the meal! 🙂 Yes, you can tell a child that one glass is all they get, you’re the parent…I’ve heard it all. That’s not my point.

What is my point then?

Well, simply this. We can easily point out a quick bunch of numbers showing how cooking at home is cheaper, but if you don’t know how to cook, are you going to? Are you going to fix that green salad and serve it to your kids when you are not used to eating salad greens? Are you as likely to make a whole chicken for dinner when you are used to greasy burgers and fries? Here’s my challenge to all the “foodies” out there…how about using these kind of “memes” to help educate others around us? 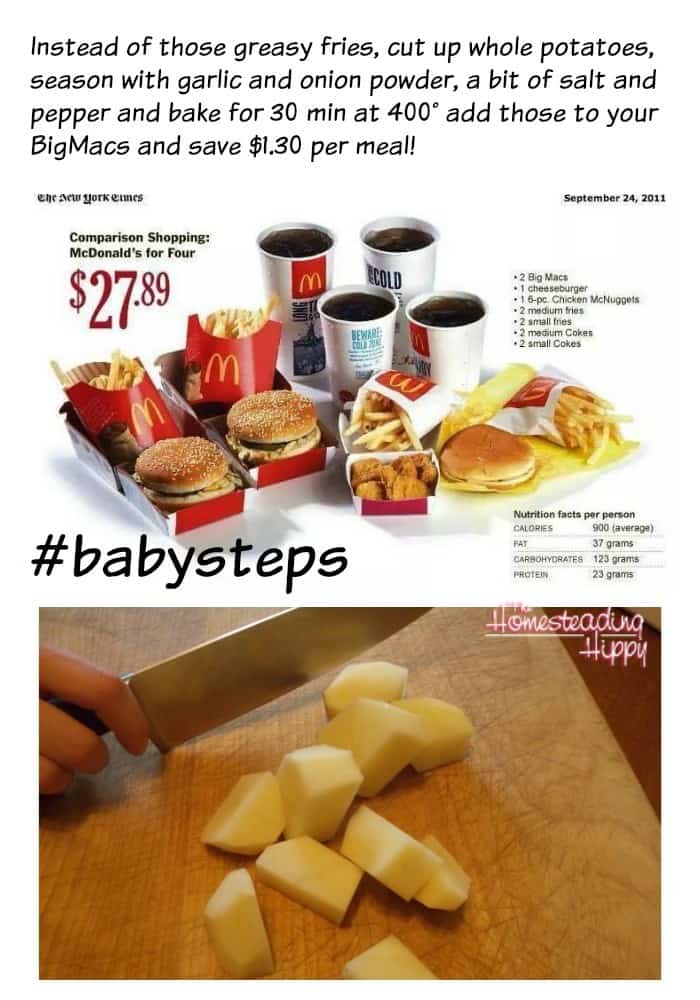 What memes would you add to help others learn how to cook from scratch with #babysteps?