Wild Cherry Bark, Prunus serotina, is an herb that is often lesser known.

The bark is stripped from young plants in early fall, and dried in the shade to avoid losing the essential oil properties. It has anti-tussive, expectorant, astrigent and sedative properties. It has a traditional use of being used as a cough suppressant, colds, fever and sore throats.

This is one herb that would be a “must have” in any natural medicine apothecary. Some cautions in use of wild cherry bark, also known as contradications, include: cyanogenic glycosides that can be toxic in large doses or if used long term. It is not for use during pregnancy due to the teratogenic effects. 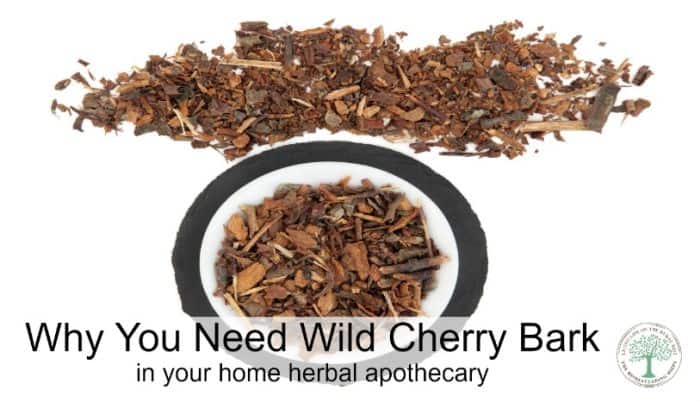 Some ways to use Wild Cherry bark are in teas, tinctures, and cough syrups.

Clinical studies support that it helps to alleviate that nagging cough, such as with bronchitis or the flu. It does this by acting as a sedative to the body during the cough reflex.

To make an infusion

simply add 1 teaspoon of the dried bark to 1 cup of boiling water and allow to steep for 10-15 minutes. Sweeten with a teaspoon of honey. Honey is also supported in clinical studies to help with coughing and to soothe an irritated throat. Drink 2-3 times a day while symptoms persist.

Begin by adding the dried herbs to 4 cups of cold water. Bring to a boil and allow the herbs to continue to boil until liquid is reduced by half. Strain the herbs and add honey. Stir to combine and store in a tightly covered container in the fridge. We use 1 Tablespoon, 3 times a day for adults, and 1 teaspoon 3 times a day for our kids ages 2-10.