Living “The Amish Lifestyle” is a common phrase these days, especially among homesteaders.

To many, it conveys a simpler lifestyle, with whole foods, family, and faith combined into daily living. Many see the Amish as eating only organic foods, not vaccinating their children, living off their land only, and living the life we all dream of. But, is it really that way? I have lived in Amish heartland in Northern Indiana for 12 years and I don’t see it.

I showed some of the posts to my Amish friend.

It took her nearly 1/2 an hour to stop laughing. “Is that what you English really think?”, she said. Yes, to the Amish, non-Amish are “English”. She really couldn’t understand how people got some of those ideas. So, today, we are going to debunk some of the more common myths.

Myth One: Amish eat only the foods they grow on their own farm, and it’s all organic.

I think this is the one that made her laugh the most, to be honest. Sure, they garden, raise beef and pork and have chickens, goats or milking cows. Well, most of them. But, they are just like us and they will buy cereal, dairy, shortening, sugar, flour etc. at Aldi or Walmart.

They will buy canned soup by the case load for their recipes, and Velveeta cheese is a popular item. Hardly organic, and hardly home grown. In their gardens, they will also use chemicals like Sevin to control pests. Yes, some are organic, but it’s at the same rate the English are. They simply are NOT all organic. And, don’t even get me started on Amish peanut butter, chock full of corn syrup.

Um, yes they do. They just normally use doctors within their own community, and they don’t go to Facebook and tell you all about what they do. Many of them are private people (just like everyone used to be before social media) and you also won’t hear about depression, abuse, or drug usage. They just don’t talk about it outside their community.

As a matter of fact, those things occur here all the time, just like the non-Amish. But, at the local center that helps them, the Amish have their OWN spaces and group therapies. They don’t mix with the English there. They also have the same rate of autism, downs syndrome and other ailments as the non-Amish, but once again, they DON’T TALK ABOUT IT with the Non-Amish.

Myth 3: Amish don’t use electricity and their lifestyle is so simple.

I am going to shock many of you here, but the non electric rule is under the local Bishop’s authority. Some allow it, some don’t. My friend told me a story about a young couple that bought a house that had electricity.

The Bishop at the time didn’t allow it so, they had to pull it all out. The next Bishop said it was okay, so they put it back in. The next Bishop had them pull it out again. Yeah, they really did that. Need a shocker? There are those who have electricity that use *gulp* microwaves.

Just follow some of them around the store and see all the frozen microwaveable pizzas, chicken nuggets and such that they buy. Sure, many do live without electricity, but among them, there are solar panels and wind generators. They just don’t use the local electric company.

Myth 4: The Amish don’t use cars

Okay, so my friend laughed really hard at that one, too. It’s just too general. Sure, a lot of them use horse and buggies. But, some have cars or trucks. It’s more the old order Amish that use horses, and the “Beachy” Amish that drive. But, they do.

They also have English drivers that will take them to the store, or to other places. As a matter of fact, there are several drivers in my neighborhood that make a nice living off driving Amish all over. The biggest factor there is that they are required to “make it a sacrifice” to use a driver, so they may pay up to $60 each for a trip to the store.

Myth 5: Their lifestyle is so simple and easy

Well, in the same manner that ours used to be in the 1950’s. Most of them just don’t have the distractions like social media that we do. And, yes, some DO use it and have cell/smart phones. Their days are generally full of keeping the home and farm running, like any homesteader. Doing laundry daily, hauling water if necessary, washing dishes, caring for children and making meals. Sound familiar?

Myth 6: The Amish live outside the rest of the world

The ones who say that make me wonder if they have ever lived near Amish. Sure, there are some who try and deal with only other Amish, but in today’s world, that is next to impossible. They live and do business among them daily. From their country stores, to roadside bakeries, to selling rabbits, eggs, chickens and other items, I’d say you are hard pressed to find an Amish person who has TRULY been able to cut themselves off from the rest of the world.

What you WILL find true about the Amish

They are wonderful, caring people who love to laugh and be among family and friends as much as possible. They are a close knit sort who generally don’t move too far away from where the rest of their family members are.

I have found them to be generous and very easy to talk to and I have learned a lot about gardening, chickens and goats from my Amish friends. They take their religion very seriously. As a matter of fact, you won’t find Amish dolls with faces, nor do they take ID pictures for driver licenses. That stems from the commandment of no graven images in the Bible.

They don’t like their picture taken for that same reason, which is why I have no real Amish pictures to show you. You can take a picture in the store “on the sly” but I won’t, out of respect. All in all, the Amish are just like you and me, except they wear bonnets and some only wear black dresses. Some wear different colors of dresses. (dependent on the Bishop again.)

So, if you think “Amish”, think of a great group of folks who are living just like you and me, and remember that they are not that different. And, get to know them…you may be surprised at what you learn from them directly. 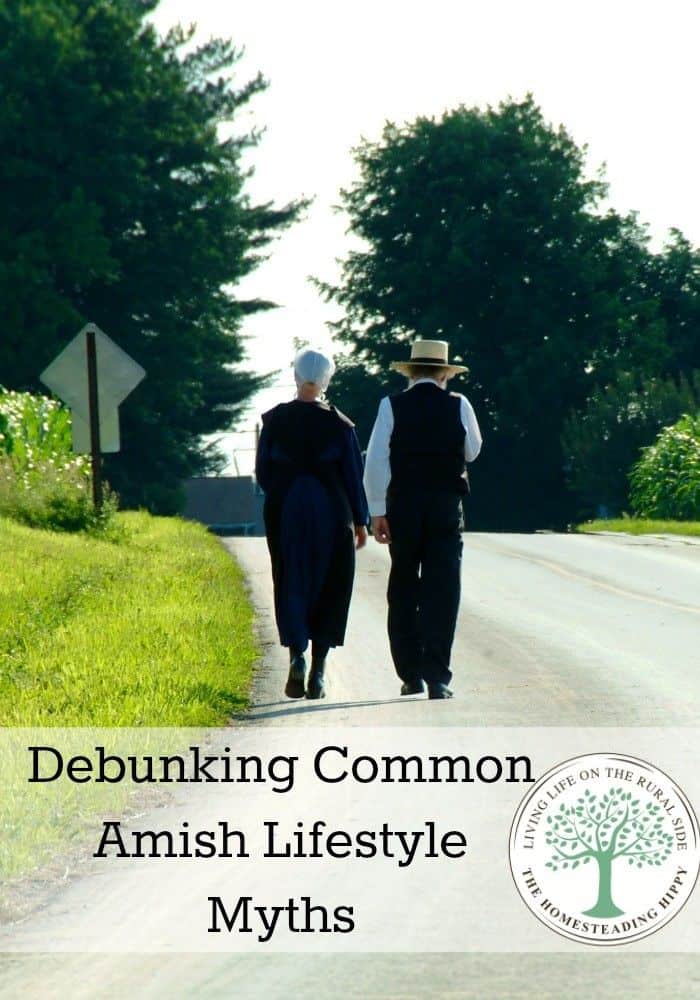 19 thoughts on “Debunking Some of the “Amish Lifestyle” myths”