Nothing says fall like pumpkin! We love our pumpkin spice lattes, pumpkin pies, and of course, our jack o’lanterns. If you love pumpkins, and you enjoy gardening, it might be time to plant, grow, and harvest pumpkins for yourself.

Just imagine having your homegrown pumpkins grace the table at your Thanksgiving dinner. Or perhaps you would enjoy decorating your front porch for Halloween the fruit of your own garden.

Or perhaps you would prefer to have soup or pie that you made yourself from your very own pumpkins. With some simple considerations, pumpkins are easy and enjoyable to grow.

Pumpkins are scientifically considered to be a fruit because the part you eat contains the seeds. Pumpkin belongs to the same family of plants as both gourds and squash, known as cucurbita.

A pumpkin is technically a form of winter squash and they are cultivated in over forty different varieties for eating and decorating. Every part of the pumpkin plant is edible, including the stems, leaves, skin, flowers, seeds and pulp.

A specialty cultivar of regular pumpkins is the white pumpkin. White pumpkins bear a beautiful and ghostly white color which stands out in deep contrast to a more traditional orange pumpkin.

While calorie content and water content of orange pumpkins are similar to that of white pumpkins, white pumpkins may have somewhat less vitamins. Nutritionally, they are otherwise comparable and great to try.

Pumpkins have been grown and cultivated for thousands of years on every continent except Antartica. Early settlers in the United States created the precursor to the pumpkin pie when growing their own pumpkins.

After scooping out the seeds and pulp, the pumpkins were filled with milk and honey and then baked in the fire. Essentially, pumpkins were used as a pie crust rather than as a pie filling like we know today. Whether you enjoy pumpkins for their pie filling or for carving and decorating, there is a variety of pumpkin for you.

Pumpkins come in all kinds of sizes, colors, and uses. While every pumpkin may be edible, not all pumpkins are as tasty as others. Varieties used for carving or decorative purposes may not taste as good as those cultivated for cooking or baking purposes. A few varieties are great for both.

Keep in mind that you cannot harvest a pumpkin based solely on its size, because pumpkins that are harvested before maturity will decay more quickly and not last well. Instead, choose your variety or type of pumpkin based on its typical size, use, and color.

Then harvest your pumpkins when they have reached maturity and are fully ripened. There are over forty different varieties of pumpkins to choose from, and many are selected based on their size and type. For example, there are five basic types or means to select pumpkins to grow:

Some prize-winning pumpkin producers claim that feeding milk to your pumpkin will help it to grow larger. To do so, fill a container with milk and punch a small hole in the lid. Run a cotton wick or wicking material through the hole into the milk.

With a sharp knife, cut a small and shallow slit on the underside of the vine of the pumpkin you would like to feed with milk. Place the wick into the opening in the vine, and wrap with gauze to protect the slit. This may increase the potential size of your giant pumpkin.

Miniature pumpkins are great for fall displays, table decorations, craft projects, and can be delicious when baked.

When to Plant Pumpkins?

Pumpkins will not germinate in cold soil, and the small seedlings are very susceptible to frost. You can direct sow your pumpkin seeds after all danger of frost has passed and the soil is warm and workable.

The soil temperature must be at least 70 degrees, and preferably, 95 degrees. In the northern areas, if you want pumpkins for Halloween, you will need to plant them by the end of May. In more southern areas, you can start your pumpkins as late as July for a Halloween harvest.

Where to Plant Pumpkins

Pumpkins do well in full sun to part shade, so choose a sunny spot in your garden to plant your pumpkins with enough room for them to grow. Vining pumpkins need space, and some gardeners will choose to plant their pumpkins along the outside edges of the garden so the vines do not overtake the other vegetables.

If you are planting your pumpkins in hills, you want to space those hills five to six feet apart. Place your hills in rows that are ten to fifteen apart, so that you have around fifty to one hundred square feet of space per hill of pumpkins. Mini pumpkins will require less space than larger varieties.

If space is an issue, look for semi-bush or bush varieties of pumpkin. Pumpkins can be grown in large containers or buckets, but will need extra feeding and monitoring for moisture.

How to Plant Pumpkins

Pumpkins do best when direct sown into hills in enriched garden soil. The soil in small hills will warm up faster than a flat garden plot. However, if your growing season is short, you can start pumpkins indoors two to four weeks before your last frost date.

Harden off your seedlings before transplanting them in your garden. Plants should germinate within a week. When thinning, take care not to disturb the roots of the pumpkin seedlings you are keeping. Carefully snip off the seedlings you choose not to keep.

Special Considerations for Growing Them

Pumpkin plants are very tender and do no like their roots disturbed. Be very gentle when weeding, cultivating, or pruning. The less you disturb the remaining plants the better they will grow. Mulching will cut down on the need for pulling weeds.

Pumpkins can rot when exposed to damp soil. To prevent your pumpkins from rotting, place a thick piece of cardboard or scrap of wood under your pumpkins to keep them dry. You can gently turn the pumpkins to encourage even growth, but be very careful not to damage the stem in any way.

Row covers can be used early in the season to protect the tender seedlings from weather and pests, but you will need to remove these covers before flowers emerge in order for pollination to occur. Pests that attack pumpkins are squash bugs, beetles, and aphids.

The first set of flowers to appear on your pumpkin vines are most likely male flowers. The purpose of male flowers is to begin to attract pollinators to the plants, but these flowers will not turn into fruit. Subsequent flowers will be both male and female.

The female flowers will produce fruit when pollinated. You can plant brightly colored flowers around your pumpkins to attract more pollinators to your pumpkin patch. Avoid using pesticides after flowers appear so as not to harm the pollinators.

Pumpkins require heavy feeding. Apply compost or fertilizer regularly to keep vines producing and to grow healthy fruit. Use a high nitrogen fertilizer early on when seedlings are young. Later, switch to a high phosphorus fertilizer shortly before the blooms begin to appear.

Pumpkins also require plenty of water, up to an inch per week, especially when fruit is beginning to appear and grow. Avoid watering the leaves and fruit of the pumpkin vine, and concentrate water at the root area.

How to Harvest Pumpkins

Do not harvest pumpkins based on their size because immature pumpkins will not last long after being picked. Select your pumpkin variety based on the size you desire, and then harvest them when the pumpkins are fully mature and ripe.

You can tell a pumpkin is ripe when its skin has turned a deep solid color. A ripe pumpkin will sound hollow when thumped, and it will resist being punctured when you press your nail into the rind.

How to Store Pumpkins

Never carry a pumpkin by its stem, always carry it in both hands. Many pumpkins can be stored anywhere from thirty to ninety days when stored properly. To make pumpkins last longer, wash off the dirt and then gently cleanse the skin with a mild bleach and water solution and then allow it to dry completely.

Pumpkins kept in warmth or sunlight will rot more quickly, so make sure to store your pumpkin in a cool, dark, and dry place. Do not store pumpkins directly on cement, place them on a board or cardboard instead. Do not stack pumpkins or allow them to touch each other.

Choose pumpkins to store which do not have any blemishes or cuts in the skin. Some experts say pumpkins will last better if they are cured. You can cure your pumpkins by leaving them in the sun in hot weather for seven to ten days.

Cooked pumpkin can be puréed with an immersion blender or food processor and frozen in ice cube trays to use for soups, cooking, and baking. Or dice the flesh of raw pumpkin and loosely freeze in freezer bags to use in the same ways. Raw or puréed pumpkin can be kept frozen for up to a year without affecting the taste and texture.

Miniature pumpkins will need less space to grow, will jumbo varieties will require much more space, fertilizer, and water. With just a little care and consideration, pumpkins are relatively easy to grow and fun to use.

All varieties are edible either raw and cooked, although cooking and baking varieties taste much better than those cultivated for decorative purposes.

Did you find this article useful? Be sure to PIN IT to Pinterest for later! 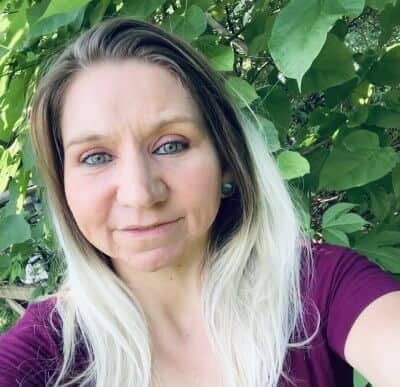 Amanda is a homesteader and a Jesus-loving, mother of 6 toddlers. She’s raising lots of fancy chickens and goats on her small homestead (among other things).