Ah, to be able to bottle the tastes of fall and enjoy it all year long. Did you know that you can? How, you may ask? With this delicious pear sauce!

Pear sauce is just what you think it is. It’s ripe pears, mushed and cooked into a slightly chunky, slightly smooth sauce.

It’s great for homemade baby food, eating out of the jar, making pear butter, or as a substitute for applesauce in any recipe.

Pears make a great pear sauce due to their light flavor and softer texture. It makes it a cinch to mush and cook down.

Pear sauce is the perfect food, in my opinion.

Adding a touch of cinnamon makes the pear sauce pop!

At one point in time, my son could easily eat a pint of this dreamy goodness in one sitting. He loved it that much.

I was grateful that our neighbor allowed me to collect pears from their trees each year so that I could accommodate him easily.

I would often glean nearly 5 bushels of pears for canning and making pear sauce. He has since slowed down a bit on the pear sauce, but we still love adding it to recipes and enjoying it from time to time out of the jar.

Making the pear sauce is super easy. It just requires pears, a knife and a large pot. Maybe a stick blender or potato masher. Or a fork. Your choice.

Depending on the ripeness of the pears, pear sauce can be made start to finish in less than 5 minutes. Seriously, how easy is that? I just know that you are going to love homemade pear sauce as much as I do! 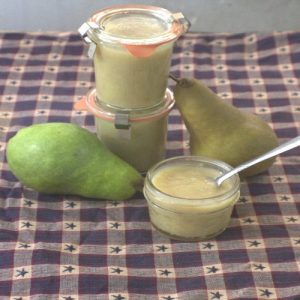 How to Can Peas
Easy Peach Butter Recipe for Canning
4 Ways to Sterilize Jars
Preserving Eggplant: 14 Quick And Easy Ways To Do It