As a homesteader, much of what you do throughout the year involves preserving, preparing, and conserving food. Therefore, it is important to know the warning signs of spoiled food–it’s not always what you think.

Your five senses will give you more insight into the safety of your food than any date might. Plus, if you’re a homesteader, you probably produce most of your own food anyway, and it’s unlikely that you label every single thing you put in the refrigerator, freezer, or canner. Follow these guidelines instead to make sure the food you are eating is fresh, flavorful, and safe for consumption.

If your deli meats or leftover roasts have a sheen or feel soggy, they are past their prime. This is also the case for vegetables. In general, meat needs to be tossed within ten days of putting it in the refrigerator–although this is not a hard and fast rule.

Mold is usually a pretty obvious sign of spoilage, making it an easy way to tell if food is spoiled. Spoilage starts with small spores that then spread quickly to aging food. Common on fruits, vegetables, and breads, this is a telltale sign that your food needs to be tossed. Be vigilant, because mold can grow in hidden locations, such as the bottom of plastic containers or glass jars.

If you notice just a few spots of mold covering a loaf of bread, you can cut off the edges and continue to eat it. However, any mold on meat, dairy products, fruits, or vegetables means it’s time to say goodbye.

Bread that has hardened or dried, but not formed mold, can still be used for bread crumbs or croutons. It also makes a great snack for your chickens!

This isn’t always a sign of spoilage, as sometimes food will change colors as it ages without affecting the quality or safety of the food. Examples of unaffected foods include avocados, which naturally lighten as they are exposed to air. However, if you notice green vegetables changing color, they are probably ready for the trash can.

Sometimes, raw meats will also become discolored when left in the refrigerator. Meat frequently changes color when exposed to air, especially if it’s fresh meat that has not been treated with preservatives. As long as your discoloration isn’t accompanied by slime, you’re probably okay to eat it.

Usually, fruits and vegetables that have become discolored can be repurposed in baked goods.

Spoiled vegetables often turn yellow, such as broccoli or kale, but some, like celery or onion, can be saved by soaking them in ice water for a few minutes. An exception to salvation is potatoes. If these turn green, throw them away. They will be off in flavor and could make you sick.

You already know that spoiled milk gives off a rancid odor after a few weeks. However, the sniff test works well for spoiled fruits, vegetables, and meats as well. If it smells bad, don’t take a risk by eating it. It won’t taste good, anyway.

This is especially true for fruits and vegetables. If they become squishy, concave, or otherwise different in consistency than what they were when you stored them, they are ready to be tossed. Additionally, if the fruit produces a wrinkly skin or a mushy, grainy texture, it’s probably time to go. Keep in mind that browned and softened apples, bananas, and other fruits can still be used in baked goods, and often work better than their fresher counterparts for that application.

Change in texture is also commonly seen in spoiled dairy products. Chunky milk is definitely bad, as is cheese that has begun to get soggy. It’s worth noting that soft cheese tend to spoil faster than hard cheeses.

For frozen foods, if you notice they are covered in frost, they may be spoiled. Sometimes frost just indicates mild freezer burn, which can affect the flavor and texture of the food but not necessarily the safety.

You should also toss any frozen food if you notice the package is ripped. This could indicate that bacteria has been allowed to enter either before or after freezing and thawing. Similarly, if your frozen food was sitting in any icy puddle, get rid of it. This indicates that it began to thaw at some point, and the food might be compromised.

If you own chickens on the homestead, you likely find yourself frequently flooded with a deluge of eggs. A quick way to test the freshness of your eggs is to drop them in fresh, cold water. If the egg is fresh and safe to eat, it will sink. If it has spoiled, it will rise to the top. This is because egg shells are slightly porous and, as an egg ages, it will produce air inside the shell. As the egg ages, it will collect more air, increasing the likelihood that it will float.

Take extra caution when trying to decide whether canned food has spoiled. Canned food presents a unique food poisoning risk, botulism, which can be fatal. Spoiled canned food is usually indicated by some sort of abnormality in the jar itself, such as a bulging can or lid, or a broken seal. You might noticed a corroded can or lid, or food that has seeped under the jar’s lid.

Another sign of spoiled canned food is tiny bubbles moving upward in the jar, also known as gassiness. If food gives off a bad odor, looks mushy, or presents any of the other warning signs listed above, don’t risk it–toss it.

Although you probably don’t have as many of these ingredients kicking around in your refrigerator, it’s important that you know how to spot these warning signs as well. Many homesteaders enjoy making hummus. If your hummus develops a sour taste, it has gone bad.

Similarly, yogurt that has gone bad will begin to puddle. Some yogurt will naturally have some liquid lasting on top, but a large amount of liquid indicates spoilage, as does the formation of mold.

Spoiled fish will have slimy flesh with a slippery coating. You might also notice that the fish begin to smell much stronger. Try to eat any fresh-caught fish within thirty-six hours. If this isn’t a likely possibility, clean and freeze them as soon as you get them home.

While these aren’t the only signs of food spoilage, these are certainly easy ways to determine if your food is safe to eat. By exercising a little extra caution when preparing your meals, you can rest easy that you are safe from illness and be able to enjoy the delicious fruits of your homesteading labor. 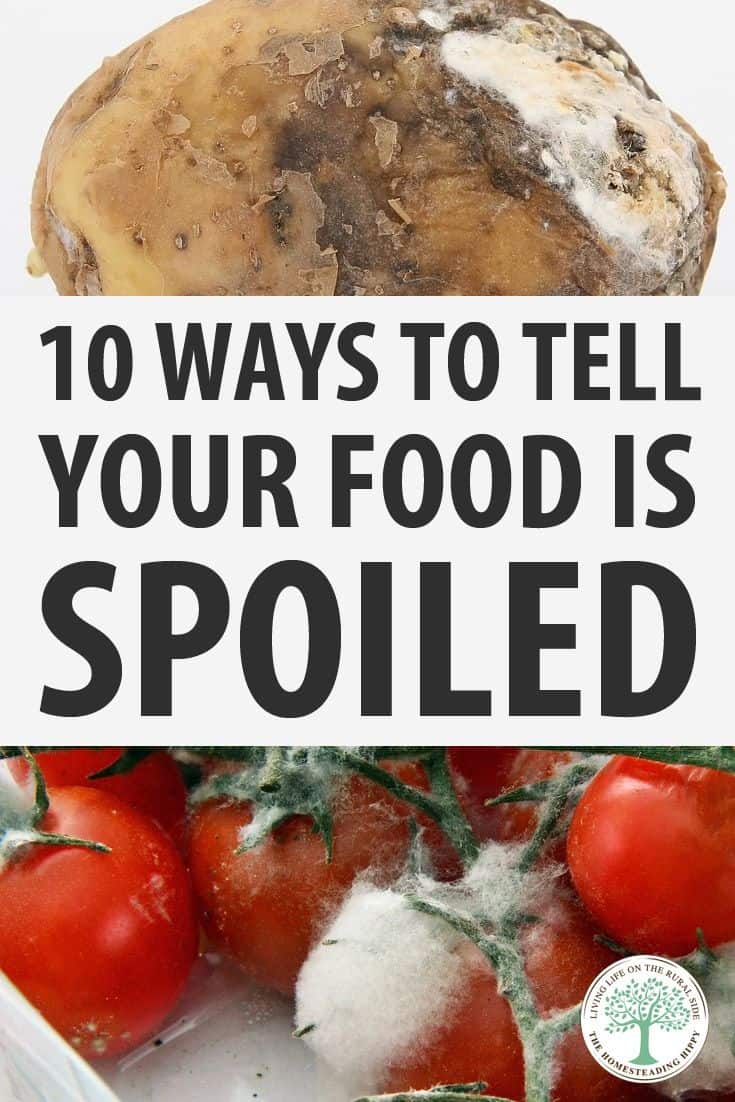 Rebekah is a full-time homesteader. On her 22 acres, she raises chickens, sheep and bees, not to mention she grows a wide variety of veggies. She has a huge greenhouse and does lots of DIY projects with her husband in her ever-growing homesteading endeavor.