It kind of hurts to sacrifice a beer to the making of bread when the amber liquid could slide down your throat on a hot day… but you need the beer with its yeast content to make this loaf of bread work. It takes just three ingredients – unless of course you want extra salt – then it makes four ingredients.

The great things about this bread there is no need to knead the bread, wait for the first rise, then the knocking back and waiting for the second rise – and finding a warm spot out of the wind for the dough, which could get tricky when camping.

You can use any type of beer that you enjoy drinking – it will impart some flavor to the bread, so don’t choose a beer you really don’t like.

Personally I would avoid some of the pale ales that have something of a fruity flavor. After all, do you really want fruit flavored bread to eat with a stew? But then I’ve never actually used a pale ale for this recipe – lager and pilsner are my go-to favorites.

When choosing your beer, you will find that some manufacturers make smaller cans of beer that are just 340 ml, while others may make the large 375 ml can, or somewhere in-between.

As a rule of thumb the majority of the beer goes into the bread with a liberal swig left over for the cook! If you are using the smaller cans it would be generous to include one whole can for the cook because the loaf will need all 340ml.

When you are pouring the beer into the batter, pour in half then mix the dough a bit so you can judge how much more you need – the mix should not be too sloppy.

If this is going into a Dutch oven, remember they are usually pretty large, so double the quantities unless you are happy with a fairly thin loaf.

If cooking for a crowd I would definitely double the quantities, as beer bread tends to get wolfed down fast with most people having two slices – one with the main course, and one as ‘dessert’.

You can use sweet corn for the beer cornbread or corn kernels. I used corn kernels in this recipe because that’s what I had in my store cupboard.

Corn kernels give a somewhat coarser loaf than using the sweetcorn. Just be careful when adding the beer as the sweetcorn is a bit sloppier than the corn kernels and you may need a little less beer. The cook may even be lucky enough to get two swigs left over in the bottle!

If you choose not to add corn, then you will need to add the sugar as described in the recipe – it works with the yeast in the beer to help with the rise. Whichever way you make it, you still only need three main ingredients, plus the optional salt.

You have the option of putting chopped chives and a handful of grated cheese into the mix, but if this is a survival bread you might want to keep it as simple and easy as possible. 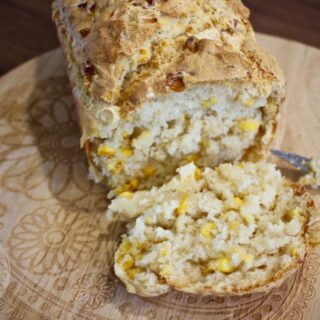 Ingredients for beer bread with corn

Ingredients for Beer Bread Without Corn

Beer-cornbread is easy and simple to make, adding a new bread dimension to fuss-free camping, or survival baking.