Bobotie (pronounced Bab-oor-ti) is a casserole dish that South Africans get very excited about because of the depth of flavor in the curried ground beef combined with fruit like apples and raisins.

It is one of those comfort foods that remind people of home, and has spread from Cape Town outward across South Africa, and with the diaspora of South Africans, is spreading across the world.

The population group known in South Africa as Cape Malays were brought to South Africa, or rather The Cape of Good Hope as it was then known, in the 16th century. They were mainly Indonesian exiles and enslaved people from Malaysia and other parts of South East Asia.

The Dutch East India Company (DEIC) brought them over to establish a colony in the Cape, aimed primarily at supplying fresh produce to the DEIC ships travelling back and forth from Holland to the east.

With these people came recipes which they adapted to suit ingredients in South Africa, but retain much of the flavor and quirks of Asian food – like the penchant for adding an egg into dishes.

If you have ever traveled to Thailand, Malaysia, or Indonesia you will know that street food vendors and restaurants will serve their noodle or meat dishes with an extra egg broken into the mix and swirled through. It certainly makes the food even tastier, adding extra protein to dishes, and Bobotie is no exception.

It runs high to protein, making it an ideal choice for a fully rounded meal when served with yellow rice, with a little extra spice that makes your lips tingle.

One might call it the cottage pie of the east, but without the potato topping. Instead the topping is formed by mixing eggs and milk and when the dish is baked in the oven, it forms a thin custardy layer on top redolent with the flavor of the meat, but nothing even close to the 1 ½ to 2 inch layer of potato on a Shepherd’s Pie.

Bobotie is traditionally served with yellow rice prepared with spices and ground turmeric, to give it a golden yellow color. 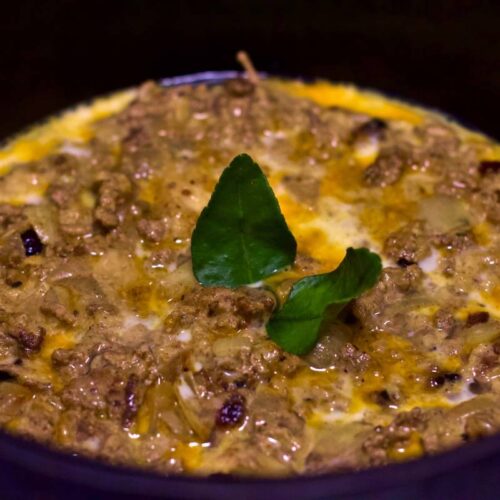 If you enjoyed this recipe be sure to pin it to one of your Pinterest boards.