It’s winter on the homestead and we’ve had plenty of snow this year. The cow has dried up but years ago my grandmother taught us to freeze milk when we had an abundance. However, I’m going to need my freezer space soon and must use up the milk that is taking up space or lose it.

My friend asked me if I’d ever “dehydrated” the milk. I had to reply that I’d never tried it, but, that got me to thinking, I have 2 excellent dehydrators and about 4 gallons of frozen milk taking up space in my freezer. What better way to test out the options? So, I set to work.

I figured it will take one to two days for the milk to thaw out in the refrigerator. I chose not to thaw it at room temperature because if it thaws too fast it could wind up spoiling and then I’d have to dehydrate sour milk. I prefer that it’s not sour when I dehydrate it.

Here are the steps that I took to dehydrate our milk so that I would have “powdered milk” here on our homestead.

Preparing Your Milk For Dehydrating

Scalding milk kills off any enzymes or bacteria that can spoil the milk. To scald milk, simply place milk into a saucepan and bring it just to a boil. Don’t let it get to a hard boil. Just heat it up and stop the heat action as soon as the milk reaches a boiling point. The milk should reach an internal temperature of 180 degrees Fahrenheit.

Use a candy thermometer to check the temperature. Make sure that your candy thermometer doesn’t touch the bottom of the pan at any time as it will throw off the actual temperature of the product. If you accidentally turn your head and the milk exceeds 212 degrees Fahrenheit, you’re going to have to start over with a fresh batch of milk. Milk that is heated to 212 degrees Fahrenheit or higher will curdle and that is a huge mess.

Scalded milk should “coat” the pan. When you tilt the pan to the side and then put the pan back to the upright position, there should be a thin coating of milk on the inside of the pan where the scalded milk touched. If there is not a thin coating of milk, continue heating the milk until it thinly coats the pan when you tilt the pan. After scalding milk, I again placed our milk into the refrigerator to cool it before pouring it onto our dehydrator trays.

I can remember as a young child my mother “scalding” milk for a recipe. I was too young to really care, but, apparently when scalding milk for a recipe it will make the baked goods bake up fluffier. It must have worked because my mothers pancakes and biscuits were always nice and fluffy. Although the purpose of scalding milk before dehydrating it is to kill off bacteria or enzymes that may spoil the milk, it’s the same process. I called my mother to verify that I had all of these steps correct before I began my project.

Preparing Your Dehydrator For Dehydrating Milk

Clean and sanitize your dehydrator. All too often we dehydrate something and then just put the dehydrator away. However, when you’re dehydrating milk you don’t want any off tastes that may have been left over from making jerky or any other dehydrated products.

Wipe your dehydrator out and make sure that you wash and sanitize the trays. I just used warm soapy water to clean the trays and rinsed them well. I then allowed them to air dry.

If your dehydrator doesn’t come with silicone mats, you can make your own by simply purchasing some silicone baking sheets or a silicone cutting board. Cut them to fit your dehydrator trays. You’ll need one of these for each tray that you plan to use in your dehydrating milk process. You could also purchase fruit roll sheets for your dehydrator if you don’t wish to make them. Since we’re trying to save money I make as many things as possible on our homestead.

I set my dehydrator temperature to 135 degrees Fahrenheit and turned on my dehydrator. The directions stated to allow the milk to dehydrate for up to 12 hours or until the milk is dry and flaky. I checked on the progress of our milk after about 4 hours and it was pretty gooey but starting to dry out on the sides of the “puddle” of milk that I had poured into the dehydrator.

I continued to check the progress of the milk every few hours until it was a dry flaky “saucer”. I turned it over several times to ensure that it was completely dry throughout the entire “puddle”.

You can also make your dehydrated milk in the oven if you don’t have a dehydrator. Here are the directions for the oven method. I’ve not tried this myself, but my great aunt told me how to do this when I was talking to her about it. She said they used to use their oven (or the sun, which isn’t recommended at all for this type of dehydrating project as the milk could spoil too easily) all the time for dehydrating herbs and very thinly sliced vegetables and she had used the oven method for dehydrating milk a time or two.

Allow the milk to simmer until most of the water has been evaporated. This will leave the milk with a thick and very creamy consistency. Be patient as it may take several hours for the milk to become thick and creamy. Allow it to become as thick as possible to make using the oven as your dehydrator easier.

Pour the milk into an oven safe pan (my great aunt said that they used a 13X9 cake pan for this project). Using a pan with sides makes it easier to dehydrate the milk in the oven and you won’t have to line the pan that way. Just make sure that you can lift the dehydrated milk up out of the pan with your spatula when you are done. A non stick pan would be the best option for this. Also, you may wish to loosen the milk from the bottom of the pan as soon as it begins to solidify, that way you can turn it over frequently so that it dries evenly.

Preheat the oven to 150 degrees Fahrenheit

Place your cake pan into the oven and allow the door to remain slightly open so that the moisture can escape. This step is very important, if the moisture can’t escape your milk isn’t going to dehydrate properly.

Allow the milk to dry for several hours, checking it often to ensure that it’s not sticking to the pan. Flip it over periodically to dry it evenly. Again, use a non stick type pan for easier removal from the pan.

My great aunt told me that they would then put the dried milk into their mortar and pestle or later, when grandma bought a blender they would take it over to her house and use the blender to powder it. It was kept in a jar and used whenever milk would be used in a recipe or to drink.

Here’s what the end result powdered  milk should looks like:

As a kid, I hated powdered milk. In fact, if I had even an inkling that my mother was trying to give me powdered milk, I’d wait until my mother wasn’t looking and I’d pour it out. I’m happy to say that dehydrating your own milk is far more delicious than the store bought version.

Maybe it’s because it doesn’t have all of those preservatives in it. Whatever the reason, drinking powdered milk that I made in our dehydrator was far more delicious than store bought powdered milk.

How To Use Dehydrated Milk

In addition to simply making up a glass of milk, there are other great ways that we use dehydrated milk in and around our homestead. Here are a few of our favorites.

This recipe is equivalent to the same sized can of sweetened condensed milk that you would buy at your local grocery store (and oh so much more delicious).

Simmer your water over a double boiler and slowly stir in the other ingredients. Continue stirring the mixture over medium heat in your double boiler and allow it to thicken to your desired consistency. Make sure you don’t stop stirring and keep in mind that it will burn your lips if you’re taste testing it and don’t cool it first. It takes approximately 15 to 20 minutes at our house to reach the right consistency.

Now that we’ve tried homemade sweetened condensed milk we don’t like the store bought version nearly as well. I now make this up in small batches every holiday season for baking and desserts.

Pour ½ cup of powdered milk into a deep bowl and mix it with ½ cup of white sugar sugar with a fork. Using a hand held mixer or a countertop mixer set to medium speed gradually add ½ cup of ice water into the powdered milk and the sugar. Keep mixing until the milk starts to form soft peaks and gradually add 2 Tablespoons of lemon juice into the creamy mix continuing to blend until it’s the desired consistency.

Use your homemade powdered milk in place of regular milk in any of your recipes and see if your family notices a difference. As long as my kids don’t walk in when I’m mixing up the milk they don’t notice it at all. Even my pickiest eaters haven’t noticed that they’re drinking powdered milk.

Always use caution with a double boiler as it’s easy to burn yourself with the steam when checking the level of water when you lift the top pan out of the bottom pan.

This year, as our homestead has an abundance of milk, I think that I’ll try dehydrating fresh milk vs previously frozen milk and see how that works out. I’m anxious to try it on fresh milk and see if that has any effect on the taste.

I made up a full pitcher of milk from our dehydrated milk and stored it in a pitcher in the refrigerator. I didn’t tell anyone that it had been dehydrated. So far, no one has said a word so I think that it’s a hit.

Dehydrated milk was a great experiment with my dehydrator and I’m relieved to find that it opened up a lot of space in my freezer. 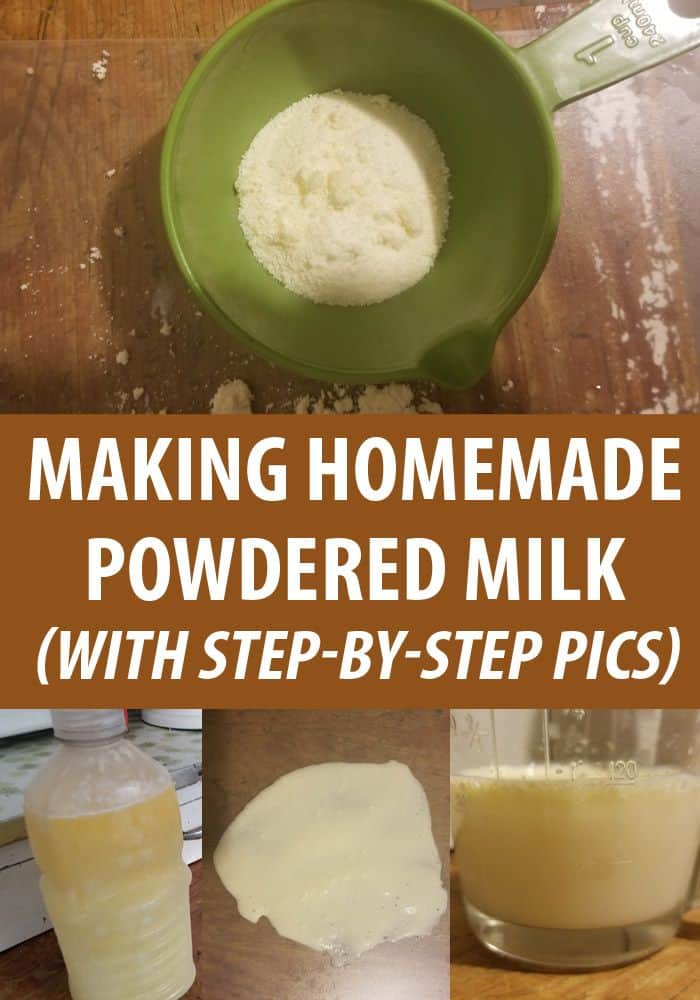