Cats love to scratch the dirt. They scratch at the litter when using the litter box as a way to hide their poop. Nothing says “FREE BATHROOM” to a cat like loose dirt and sand. Learning how to keep cats away from the garden can be tricky. Especially if you don’t want to use chemicals.

We have 3 homestead cats, who live outside. Since they like to live outside, they were in the garden beds all the time. They also seem to invite all the neighborhood cats over for a party in our garden. What we can be left with is a dug up garden bed, full of cat waste. I don’t need to tell you how nasty that is to think about, do I? Cat poop can be full of bacteria that isn’t good for humans and it doesn’t seem to compost down.

Some things we tried to keep the cats away from the garden:

We were stumped, looking for an answer to keep cats away from the garden. We had the solution, staring right at us for some time, and we didn’t even know! We “planted” plastic forks! 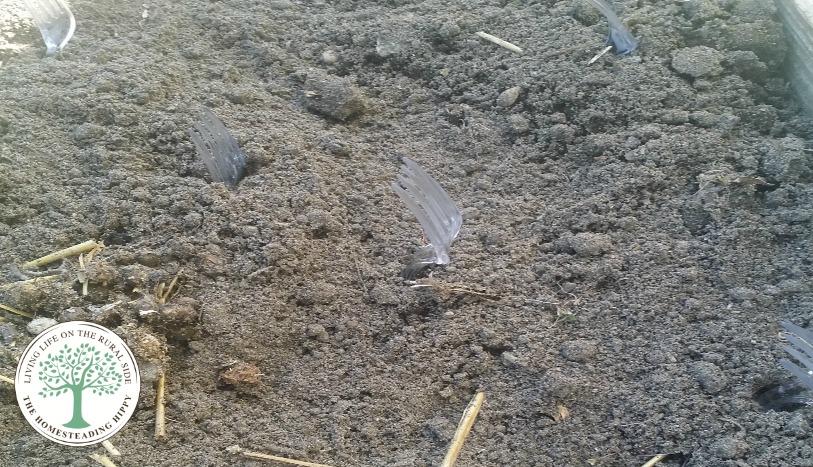 We had the forks in our camping box already, so it was inexpensive. A box of 48 forks at the store usually costs about $3.

The cats went to scratch at the freshly tilled dirt, but hit one of the forks instead. It usually deterrs them away from trying to use the garden beds as a litter box. It truly is an easy way to keep cats away from the garden! The best thing is that it doesn’t hurt them at all. They just don’t like the feeling of the forks on their paws. And yes, cats learn very quickly. They learn to stay away from the garden beds without chemicals, or spraying them down with a hose.

To “plant” your plastic forks, first plant your garden with desired seeds.

After you plant the seeds, cover them with dirt. (obviously!) Stick a fork into the dirt, about 1 inch from the seed. You want to stick the whole fork, up to the tine end, into the dirt. This keeps it from disturbing the seed as it grows. It can even serve as a marker of where you planted!

This was easy to do. We had the forks from our camping gear already, making it a inexpensive. I imagine that we will get a lot of uses out of the forks from this method. I know already that the cats didn’t like it. This doesn’t hurt them at all, either. They simply went to scratch at the turned soil, and when their paws hit, they didn’t like that.

It works great because the forks don’t move, unless you WANT them to. Rain won’t wash them away, and they don’t leave a lingering smell. This made our neighbors very happy! Happy neighbors is ALWAYS a plus when your homestead is in town, right?

Some people may be concerned about plastic leaching chemicals into the soil. There is a slight possibility of this, but it’s very slim. While that may be an issue, my personal preference is to take that SLIM chance over the LARGE chance that a cat’s poop can contaminate our plants. Cat urine is also high in ammonia, and that can destroy plant roots. My biggest concern is keeping cats away from the garden. You could also find cheap stainless steel forks at yard sales or thrift stores to use. This will help eliminate the plastic all together.

I don’t have to keep the forks in there the entire summer, either. Once the plants are well established, the cats no longer seem interested in the garden beds. I simply remove the forks at that time, and save them for next year. We have used the same forks for going on 3 years now.