Keeping your chickens cool in extreme heat is vital to keeping them happy and healthy.

When the summer months come, the heat is on. The heat and humidity can make being outside nearly unbearable. A lot of us will be able to escape the summer heat and humidity by cooling off in a lake, or inside an air conditioned home. However, chickens aren’t so lucky. A chicken or turkey can get heat stroke and even die if they get too hot.

Some signs of heat stroke in chickens:

If you suspect heat stroke in your chickens, you need to act fast. Cool them off by running cool (not cold) water over their legs and body. You want to do this a little at a time, to avoid shock.

Here are some easy ways for keeping chickens cool in summer.

Add a shaded area if there isn’t enough already.

Add a large tarp in their run area, and make sure there is plenty of dirt bath “dirt” available under the shade for them to cool off. This will allow the chicken to cool their body temperature more easily.

To see how to make a dust bath area for your chickens, read the post here.

During the hottest part of the day, add fresh water every 2 hours to keep it cool. You can also add some ice to the water to cool it down longer. When a chicken goes without water for as little as 6 hours, it can decrease egg laying production by up to 2 weeks. Keep fresh eggs coming daily by offering fresh water at all times.

You will also want to add electrolytes to the water. Add 1 teaspoon each of baking soda, salt substitute (such as No Salt), and 1 Tablespoon sugar to each gallon of fresh water. This will help the chickens maintain their electrolyte balance in extreme heat. Add this in for 2-3 water changes daily.

Add a sprinkler by their water to wet them down a bit as they get a drink.

A sprinkler on low during the hottest part of the day will allow your flock to get a cool, refreshing mist as they get a drink of water. As a bonus, ducks will LOVE playing around it, too. This will also serve to cool off all your flock, turkeys included.

Run a additional sprinkler on the coop roof, cooling the entire chicken coop.

We did this especially when we had rabbits in the same barn with the chickens to keep them all cool. It worked by allowing the top to cool off, and letting more heat escape.

Placing kernel corn, blueberries or other garden veggies in a muffin tin. Cover with water and freeze until solid. The chickens will peck at it, get a cool drink and then a frozen cooling treat as a reward..

Add a frozen watermelon 1/2 to their run to allow them to peck at the frozen treat.

This is also a great treat for helping turkeys to stay cool in the hot summer weather. All poultry loves watermelon and frozen watermelon is such a nice treat for them.

Use a fan in the coop, if possible.

You want the fan to be blowing the hot air OUT of the coop, not in the coop. This means facing the fan toward the outside, not at the chickens. This was especially nice at night, when you can get a chance to “catch up” with the heat.

You’ll want to be sure to keep the extension cord and any electrical cords off the ground and away from water.

On a hot day, placing a frozen water bottle in each nesting box allows the chicken to cool off as they are laying their eggs. We change them out 2x a day to keep the nice and cold. Make sure that you are collecting eggs more often in the summer, as they can spoil faster when it’s hot out.

Remove extra manure, as it composting can cause more heat.

This is important especially if you use the deep litter method. Consider removing some of it to allow the coop to remain a bit cooler.

What are your tips for keeping chickens cool when the heat is on? Be sure to pin this for later! 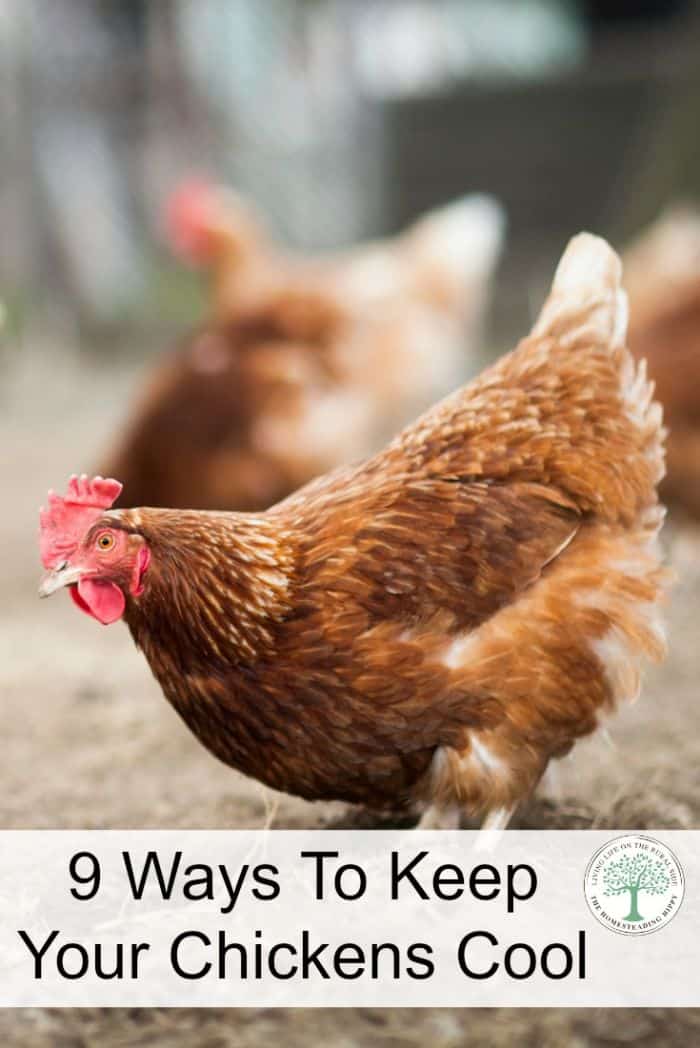