A tagine is a North African dish that is often both sweet and spicy, bringing out the flavor of the meat. The traditional way to serve it is with Moroccan flatbread or couscous to mop up every last taste sensation.

A ‘tagine’ refers to both the stew and the conical two-part earthenware dish in which it is cooked. The shape of the earthenware tagine enables the stew to remain moist by allowing the water that evaporates to condense back into the dish.

Using water sustainably is important in the dry parts of North Africa where water is a precious commodity, especially in travels across the desert, but if you don’t have a tagine a Dutch Oven works perfectly. 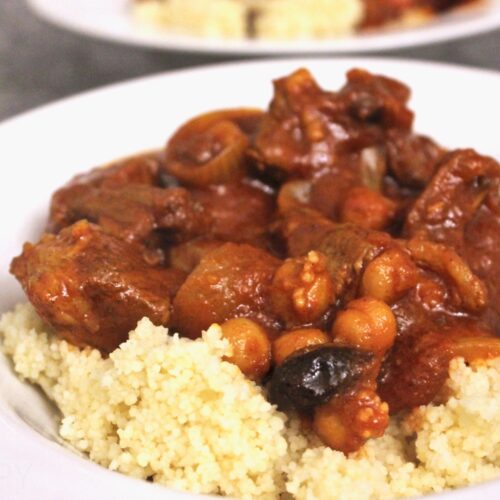 While apricots and almonds are traditionally used together we also gave the option for sultanas. Some recipes call for dates – if you like you can try the tagine with dates instead of apricots or sultanas.

When travelling, the locals in North Africa didn’t get too rigorous about exactly which type of dried fruit they put into the tagine, if it was readily available in it went!

History of the Tagine

The tagine, an unglazed earthenware two-part dish consisting of the flat base and the tall conical lid, has become fashionable in the west, but to use one means being careful as earthenware can’t be heated quickly or placed on a stove top without a diffuser.

Also, when serving be careful not to place a hot tagine directly on a cold surface like a granite or concrete countertop as the change in temperature may cause the tagine to crack; always use a wooden board to make sure this doesn’t happen.

Traditionally, tagines are used over small fires and heated slowly, and are seasoned before use by being soaked overnight in water. In the morning the water is emptied out and the inside of the base and lid rubbed with olive oil. It is then placed in a hearth and a small fire made – or you can heat it in an oven from cold up to 350 degrees Fahrenheit.

Allow to stay heated for around 2 hours, then switch off the oven, or take the firewood away, and leave the tagine there undisturbed until completely cold. Moroccans believe that the earthenware adds a special taste to the food.

Many companies make cast iron tagines, which are glazed on the outside, and will not require the kind to caution you need to exercise when using an earthenware tagine. Many glazed tagines are also sold decorated with pretty designs and colors but these are for serving rather than cooking the food.