This recipe can be really delicious with some added stir-fried vegetables, or as an accompaniment to meat or fish. It can also be made vegetarian if you use a vegetable broth instead of a meat based one.

Lentils are included in stockpiles because they last a reasonably long time – around 3 years. Although they come packaged with a best-by date, consuming them after this date is no problem.

However, the longer you keep them the more vitamins are lost over time – so five-year-old lentils won’t have too much nutritional value left in them, but they will be edible.

It is considered best to eat your lentils within a year of them being packaged – you’ll see the date they were packed near the use-by date, if you want the full benefit of these nutritious little legumes.

Why lentils are good for you

The chemical structure of lentils is not changed much by cooking which makes them unlike most foods, whose nutritional value is destroyed by the cooking process.

The list of the good stuff that lentils contain is quite long – they are fairly high in protein, rich in fiber, contain vitamin B6, niacin, thiamine, folate, riboflavin, pantothenic acid, vitamin K, zinc, manganese, selenium, magnesium and phosphorus. They also top spinach in terms of iron content.

People have been eating lentils for about 12 000 years around the areas of the near east, according to research into ancient foods. In India, lentils form the basis of many meals as a large proportion of the population is vegetarian.

Why lentils are convenient

When camping or in short-term survival situations you want food that will last, but doesn’t take too much time to cook.

I never take dry beans camping. Who has time for that long cooking process and the fact that beans need to be soaked for hours?

That’s fine for a long term survival situation where you can plan the evening meal a day ahead.

Lentils take around thirty minutes to cook and don’t need to be soaked beforehand – if you do insist on soaking them then it’s only for about an hour before cooking.

What type of lentils are tastiest?

I was in various stores the other day and wanted the usual brown lentils I cook with rice, but there didn’t seem to be any – there were orange lentils, yellow lentils, green lentils and a mixed pack.

Whaaat – where were my brown ones? I prefer the brown lentils as they seem to have a nuttier taste, and hold their shape better when cooked.

But, if you are making soups and stews then any lentils are fine as you won’t be too worried about them holding their shape, but rather about the nutrition and flavor they impart to the dish. For this recipe I had to use the greenish brown lentils.

It is worthwhile stockpiling various types of lentils, depending on how you are going to use them.

First, before you throw your lentils into a pot, always rinse them. Beans and lentils tend to sometimes have a tiny little piece of gravel that somehow gets mixed in, and you certainly don’t want to go breaking a tooth when out in the bush, far away from civilization.

Secondly, cooking instructions on the packet usually specify a 1 to 3 ratio of lentils to liquid. You can use a little more water, or for more flavor, a vegetable, chicken or beef broth.

Keep an eye on the lentils so they do not burn dry. There’s nothing worse than the tedious job of cleaning a burnt pot – and when you’re out camping you can’t just use another pot when you want to cook the next meal!

Add salt when the lentils have been cooked and drained, rather than during the boiling process, as this can lead to them being a little tougher.

Adding onions, tomatoes or other ingredients when you boil lentils will slow down the cooking time, so, rather sauté onions and tomatoes separately, then add afterwards.

Camp stoves usually have two burners, so you need to keep this in mind when preparing meals. Cook the rice first, set aside, then cook the lentils, or the other way around – whichever suits you.

Combining them in one pot doesn’t work. I tried. Once. Rice and lentils have different cooking times, and lentils impart a brown color to the rice, making the resulting mix just look dirty. You want a clean contrast of the white rice and the brown lentils.

For the photos accompanying this article I did pork meatballs in a sauce to serve with the rice and lentils:

You can use any meat or fish to accompany the dish. Maybe you have a favorite easy recipe for meatballs, whether they be ground beef, lamb or pork, but I used this Asian-Style Pork Meatballs recipe. 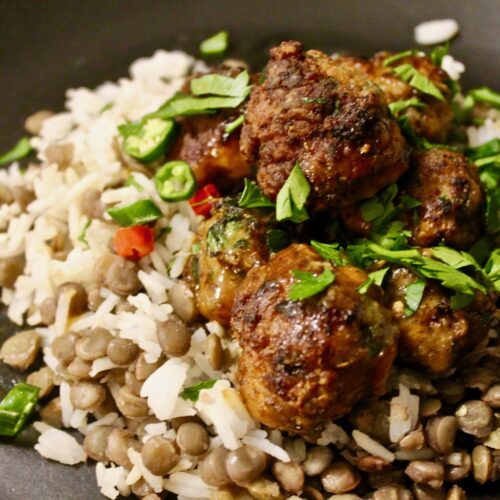 Blueberry, White Chocolate and Oat Porridge Muffins
Spinach Pesto - This Sauce Is Delicious!
How To Make Instant Pot Bone Broth (In Under 2 Hours)
Pancakes with Cranberry, Apple, and Chia Seeds