Liquid warm baked potatoes. Can you think of anything yummier? Loaded with cheese and bacon, redolent with onion and garlic this loaded baked potato soup is easy to make, and you can easily double or triple the batches so that you can have lots of leftovers.

It works well on the stove top, or even in the crock pot on low. We love to add this to our soup recipes all year round.

It’s quite versatile as well as you can include other ingredients like roasted red bell peppers, add a sprinkle of cilantro or parsley instead of the chives, but one thing you cannot change is the fluffy baked potatoes and cheese that form the heart of this soup.

You can bake potatoes specially for this recipe, or you can use leftover baked potatoes. They work out the same way, and if you bake a bunch at once, it will save you time.

For a vegetarian option, you can easily leave out the bacon. We like to use turkey or even beef bacon since we don’t eat pork in our home, but use whatever type of bacon you have or prefer.

For a dairy free option, simply leave out the cheese and replace the milk with coconut milk. It won’t be quite as thick without the cheese, but it’s s till quite delicious and rich.

The recipe calls for baked potatoes. Now, you have three ways of doing them: In the conventional oven, in the air fryer or in the coals of a campfire, in which case you will need to wrap them in aluminum foil.

Of the above methods I would suggest the first two as campfire baked potatoes can be a bit difficult – often unless a person is very vigilant they can end up charred on the outside and somewhat raw inside, plus they get wrapped in aluminum foil, which it has been determined by scientists can leach some aluminum into the food.

For oven baked potatoes start by preheating the oven to the 400°F. Wash potatoes to remove any traces of soil, and thoroughly dry before pricking the potatoes all over with a fork so the steam from the heated inside can escape and they cook more evenly.

Next, rub oil over the outside and add salt, pepper and some garlic powder. Bake your potatoes for 45 minutes, until a knife is easily inserted in the center. Remove from the oven, and allow to cool.

For air fryer baked potatoes. – choose medium size potatoes, rub or spray all over with oil that can take high temperatures when cooking – coconut, sunflower or avocado oil are good, but not olive oil.

Once they are oiled up roll them in some salt and garlic powder – the oil will help the spices stick to the potatoes.

Bake them for 40 minutes in the air fryer, at 400 degrees F, turning once after 20 minutes. The skins will be super crispy and the insides fluffy and soft.

Now for the sour cream – it’s easy to go out and buy a carton of sour cream, but if you are a homesteader with a cow for milk, or prefer simply making your own sour cream, then it is really very easy.

Take 1 ½ cups of fresh heavy whipping cream and add three teaspoons of lemon juice (or white vinegar), add in ½ a cup of milk , place in a screw top container, screw on the lid firmly, and shake up for around 30 seconds.

Take the lid off and cover with a piece of cheesecloth or any other gauzelike material and secure with a rubber band so it stays clean, and leave for 8 hours or overnight on your kitchen countertop – not in the refrigerator.

Once the soured cream is ready store in the refrigerator until it is needed. It will be a bit thinner than you usual commercially soured creams, but this is because it is completely natural without any thickeners and stabilizers added. 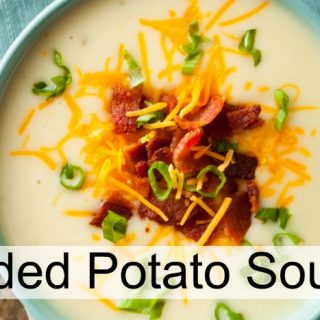 Will you try this soup tonight? Let us know how it turned out.