Greek Moussaka is a dish that has become famous around the world and probably the best way to use your harvest of eggplant.

There are a few ‘secrets’ to creating a moussaka similar to the ones they serve in those little Greek taverns.

You know, the ones with red and white checked cloths, white painted walls, facing the sparkling Mediterranean Sea, if you are in the south of Greece, or the Aegean Sea if you happen to be on the east coast.

Moussaka is a family dish redolent with the tastes of Greece – plump tomatoes, golden olive oil, ground beef or lamb, fried eggplant, all smothered in a béchamel sauce, and topped with Kefalotyri, a traditional Greek cheese similar to Parmesan – or you can substitute a cheese of your choice but preferably a strong cheese with a hint of sea salt in it.

Many people find moussaka oily – well that depends on how you prepare your egg plant. Most advice says to sprinkle the slices with salt and leave them for around 20 minutes in a colander to drain off the bitter juices, before rinsing off the salt.

My mom, who spent a number of years in Greece, always told me to put the eggplant in a bowl of cool water with some salt, and to weight down the slices with a plate so the slices stayed under the water. The water that was discarded was a brownish color.

I wanted to know why this was so and did some research. Apparently soaking the slices in cool water helps firm up the eggplant so it doesn’t absorb so much oil when frying.

If you look closely at a slice of raw eggplant you will see how porous it is. So the water bath is not so much about the bitter juices – that is for older and large eggplant, rather than the smaller younger ones, but it is mainly to prevent oil being absorbed.

Some people soak the eggplant slices in milk before draining and frying but this to me seems a bit of a waste of milk.

Now, in certain moussaka recipes you will be advised to bake the eggplant slices in the oven with a drizzle of olive oil – obviously to cut down on the oil content, but the Greeks fry their eggplant slices because they believe it gives a better flavor.

I have always fried the eggplant, so can’t comment. It is important though to drain the eggplant slices on paper towels once fried so that the final dish is not too oily.

I have an air fryer – best invention ever – and have taken to doing the eggplant in the air fryer after brushing with olive oil. The slices are tender but definitely not over oily.

When choosing your ground beef or lamb choose meat that is as lean as possible. The Greeks traditionally used lamb, but ground beef makes a delicious moussaka, and there has been a move to using beef rather than lamb.

If you are vegetarian you can substitute the ground beef with a tasty vegetarian option – like a layer of fried mushrooms, roasted red bell peppers and stir-fried zucchini.

Some people add a layer of sliced potatoes to the dish but frankly I prefer the classic eggplant, meat and béchamel sauce layers, without too many variations from what the Greeks originally made famous.

Make Ahead of Time

What I love about this recipe is you can assemble all your ingredients and make your moussaka a day ahead if you are expecting visitors.

The recipe given below can be easily doubled or trebled depending on how many guests you are catering for.

Because everything is already cooked it can be assembled, placed in the refrigerator and be baked just before serving, giving you time to chat to your guests instead of fussing around in the kitchen. It also gives time for the flavors to deepen.

When eggplants are in season and you have more than you really know what to do with then you can make a couple of complete moussaka dishes up all on one day and then freeze them.

They will last for about a month, and can be taken straight from the freezer and placed in the oven.

For frozen moussaka you will need to add an extra 20 to 25 minutes of baking time to the time given in the recipe below. Again, the time gives the flavors a chance to deepen, giving a delicious moussaka that will earn you plenty of compliments.

Don’t be tempted to get this over quickly and dump in too much milk at a time – be patient and heed the advice to add the milk gradually so that you have smooth sauce that has no hidden lumps in it.

Garlic and onion give some of the flavor to this dish but your spicing is important. The recipes calls for Allspice which is not to be confused with mixed spice.

Allspice is made from the ground dried berries of a particular tropical tree, Pimenta diocia that belongs to the myrtle family, and is a native of Central America and the West Indies, So Allspice is a single spice and mixed spice is a blend of various spices that include cinnamon, cloves, nutmeg and ginger among others.

Allspice is stronger and confusingly, also smells like an amalgamation of cinnamon, cloves and nutmeg. Substituting with mixed spice will result in less flavor.

This recipe calls for two egg yolks to be added to the sauce, but you can eliminate the egg yolks and simply add a bit more cheese.

The egg yolks help set the dish but are not essential.
For the photographs of this particular recipe I substituted a can of red kidney beans for the tomato because the last can had been used the day before.

The result was not quite as moist as if tomatoes had been used, but the beans gave it a delicious flavor which had family members asking for it to be made, “Once a week, please.”

This is a dish that can be made with some minor variations – but the eggplant and the béchamel sauce are integral to the dish. 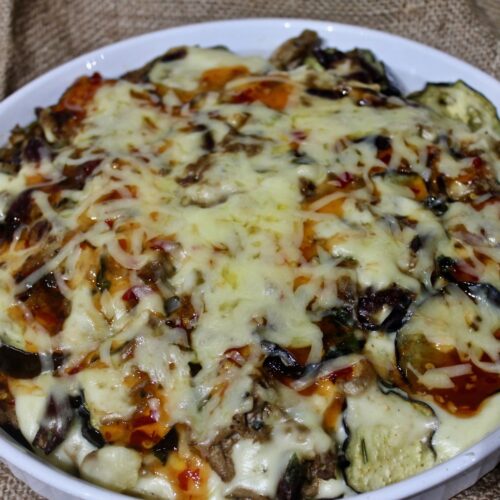 The Homesteading Hippy
A delicious way to utilize some of that great garden eggplant!
Print Recipe Pin Recipe
Cuisine greek

Have you tried this recipe? Did you try any variations to it? Let us know in the comments below.