When you fancy a chocolate pudding that does not require going out to buy chocolate slabs, nuts or cream, then this is the perfect pudding to make from store cupboard ingredients that you can whip up within an hour for unexpected guests, or as a family dinnertime treat.

The great part is that the finished pudding floats on its own sauce, so there is no need to make a separate sauce, and is ideal served with a plain vanilla ice cream.

The trick is to make this just before you plan to serve it – if you leave it standing around for a couple of hours the pudding will absorb the sauce – so don’t plan on baking it and taking along with you to a function, or preparing well in advance, or you will be disappointed with the result.

The recipe I started using was written in Afrikaans, an offshoot of the Dutch language in South Africa, and appeared in one of those 1980’s church recipe books where members of the congregation share favorite recipes handed down through the generations.

This was originally titled Sonja se Gunsteling, Sonja’s Favorite, and has been translated, tweaked and written up with step-by-step instructions.

The problem with many of these shared recipes is that it was probably written down from memory and many of the steps needed for a first-timer to make it were omitted.

In those days people weren’t into gluten free flour, but you can substitute GF flour in this recipe.

Soon this may become one of your favorites dessert recipes too, simply because it is so quick, cost-effective and delicious, and on a cold night it’s one of those comforting puddings that is hard to beat.

Prepare the sauce first, so that when your pudding batter is placed in the baking dish it is ready to pour over before placing in the oven. 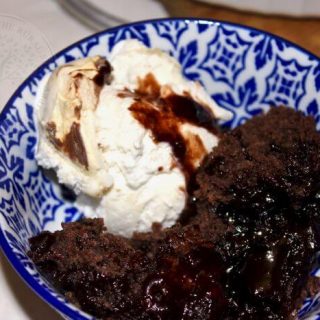 It is best eaten on the day it is made, but if you have a big family there won’t be any chance of leftovers!

To add a dash or sophistication to the pudding you can add 3 tablespoons of Cointreau, Grand Marnier or Van Der Hum liqueur to the pudding, sprinkling it over once it comes out of the oven for that lovely citrus/chocolate combination.