To Swedish children, meatballs are what chicken nuggets are to American kids. They are served on celebratory occasions and as warming suppers. Ikea made them even more famous by serving them at their stores. This hearty dish provides plenty of nutrition especially in the colder months.

The Swedes mix ground beef and pork in a half and half ratio. The reason is that although beef is tasty it can be dry, and you want the taste of the beef combined with the tender juiciness of the pork for the best meatballs. The Swedes are also rather partial to pork, it having been part of the Swedish diet since Viking times.

Nutmeg and allspice provide the flavor. Allspice  shouldn’t be confused with mixed spice as allspice is made from the dried ground berries of the Pimenta dioica tree which grows in the West Indies and Central America.

The allspice berries have hints of cinnamon and cloves, and are commonly associated with Caribbean cuisine.

You will find allspice in most supermarkets, but if you can’t find it or don’t have it in your pantry, mixed spice will do as it contains cinnamon, cloves, ginger and a number of other spices.

When making meatballs on a regular basis, here’s a shortcut to getting them all the same size…

I use my vintage ice cream scoop to scoop out blobs of the mix, and deposit them straight into the pan without having to fiddle around with rolling them between floured hands, although you can do this after scooping them out. I like them to be round rather than flattened, but that is just an aesthetic thing.

The sauce for Swedish Meatballs  is made with milk and butter, the pan drippings from browning the meatballs, and thickened with flour creating a rich meaty flavor for the gravy.

Finally, cream is added to finish off this mouth watering gravy that complements the meatballs perfectly.

Swedish Meatballs are simply incomplete if they are not served with fluffy mashed potatoes. You need the soft mashed potato to mop up every last drop of the incredible gravy.

Yes, you can serve with steamed rice or broccoli, but I’d go for mash every single time for the taste and texture.

The night I made these there were three adults having supper, but I used the ingredients according to the recipe and simply kept some cooked ones over that to be served lunchtime the next day.

My average serving is three meatballs per person, however if you have a hungry mob, they may have four each. As the mix makes about 22 to 24 meatballs, I had plenty over.

You can easily freeze the leftover cooked meatballs to defrost for lunches or as another main meal. You will have to make more gravy as you can’t freeze the gravy – the cream will tend to separate once thawed, so not a good idea.

A tip I was given by my mom was not to handle the meat too much otherwise it gets tough. I’m not sure about any scientific evidence for this but I do tend to mix the meatball ingredients lightly but thoroughly and avoid handling too much by using the ice cream scoop. Even the next day the meatballs are tender and juicy. 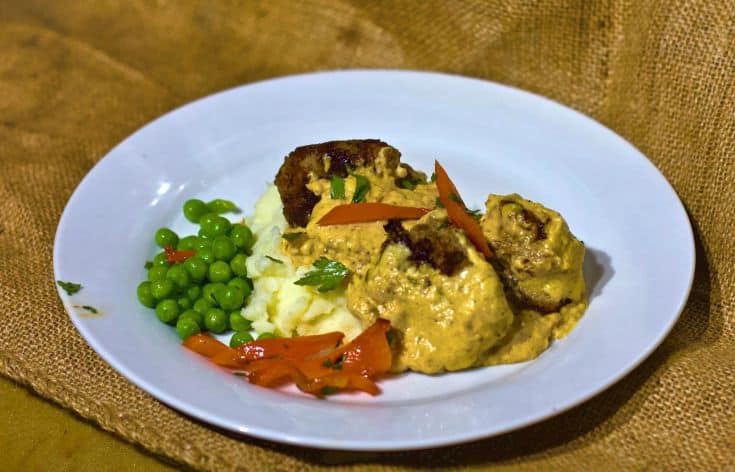 Instead of the two slices of bread, you can use 1/2 cup of dry oatmeal or ½ cup of Panko breadcrumbs mixed into the milk. To serve, any combination of two or three of the following can accompany the meal:

Serve meatballs and gravy over a bed of fluffy mashed potatoes, adding the mashed potato first, then arranging the meatballs Three per person should be adequate as these are fairly big, then finally add the creamy gravy.

To give the dish some added color lay a few thin strip of roasted red pepper over the top, a few very thin slices of red cabbage on the side and finish with a sprinkle of finely chopped parsley.

The Swedes are partial to lingonberry sauce, but cranberry sauce is fine. Besides the mashed potatoes (which just about everyone loves), the side vegetables are the choice of the family. Some kids won’t eat peas, others won’t touch carrots, and parsnip puree may be an adult only choice.

The meatballs and gravy can be served with rice, pasta, or even fresh crusty bread, the side doesn’t have to be mashed potato.

Many Swedes eat their meatballs with freshly boiled potatoes, and if you are trying to cut carbs, then a creamy cauliflower mash may be substituted.