Instead of buying the ready to roast potato wedges in a bag at the supermarket it is really easy to make them at home, using fresh potatoes from the homestead. You also know there are no hidden additives and are not adding to the plastic epidemic!

The best potatoes for wedges are Yukon Gold and Russets, but try out whatever type you have grown on the homestead and see how they turn out. Always cook more than you think the family will eat, as they tend to disappear fast.

Wedges are great as a vegetarian lunch, afternoon snack for the kids to enjoy when they get back from school or as an accompaniment to a meal. They are a popular bar food world wide.

This recipe calls for cumin – you can use ready-made ground cumin but I find it tastier to dry roast the cumin seeds in a skillet for a few minutes on medium heat until the fragrance releases, then grind them in a mortar and pestle before using.

The recipe also calls for leaf masala which you can get at Indian spice shops or a garam masala will do – masala is aromatic but not hot like chili powder, made of ground up dried chilies, designed to give food the traditional heat and kick of chili.

If you can’t find any type of masal, then you can use paprika instead but the wedges won’t have the depth of flavor the masala provides.

The purpose of adding leaf masala spices is not to achieve an overwhelming curry flavor but rather a nice aromatic coating for your potato wedges.

If you use garam masala remember that it usually contains cinnamon, mace, cardamom pods, cloves, cumin, coriander, dried ground curry leaves, as well as black and white peppercorns, so you may want to use a little less black pepper.

You can always grind on more black pepper once the wedges are done if you feel they need it.

The aromatic leaves of Murraya koenigii, known as the curry leaf tree obtained its name because it is added to various curries, and is also referred to known as Kadi Patta or sweet neem.

It is native to India but will grow in tropical and sub-tropical regions around the world, and is prized for the extra flavor it gives to spice mixes. 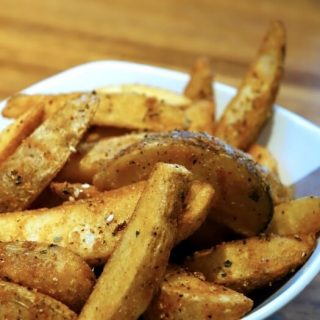 The wedges can be served with crème fraiche that can be bought ready made, or you can make your own.

It is very easy: combine 1 cup of heavy cream and 1 tablespoon of buttermilk and leave out at room temperature for 12 hours so the good bacteria of the buttermilk react with the cream and form a thick mix for a French style crème fraiche dipping sauce, or reduce the buttermilk to ½ tablespoon for a lighter type of Mexican crema to drizzle over the potatoes just before serving.

You can make the crème fraiche in advance and simply put it in the refrigerator to stop the bacterial action progressing further after the 12-hour developing period, and take it out when you need to use it. It will last for about 2 weeks in the refrigerator.