The name is pretty self explanatory – chicken and leeks in this soup! The name however doesn’t mention the prunes that seem to be added in some of the recipes. They do give it a bit of a weird taste, however it is totally up to the individual to add or leave out the prunes.

Traditionally, the Scots would make the soup with an older bird that had more flavor. It may also have been a way to use up the leftovers of the Sunday roast as some recipes call for the chicken to be roasted.

Other recipes call for the chicken to be lightly fried in a pan for about 5 to 7 minutes to give it a golden color and other recipes suggest simply boiling the chicken. Do whichever is easier for you!

My mom’s family is from Edinburgh, and the recipe below is the way she made the soup for our family. Scottish housewives were not trying to be master chefs.

They made delicious wholesome meals to feed the family with what was on hand, so recipes for cock-a-leekie soup may vary in color from pale fawn to greenish – depending on if the housewife used older or younger leeks, to a more robust golden color if the chicken was roasted.

Sometimes, sausage or beef was added to extend the soup and then the color would be a richer brown.

I like the version my mom used to make that allows for the flavor of the chicken and leeks to come through without the beef or sausage overpowering them.

Whether you add barley or potatoes is a personal preference and may depend on what you have at hand. Add barley to thicken the soup, or if you have fresh potatoes peel and cut them into chunks and add to the mix, or for a smoother texture mash the potatoes before stirring them in.

Scotland with its misty weather and cold winds that blow across the highlands is a country conducive to a soup kept ready on the hearth so when people come in wet and cold they have hot soup to warm them from the inside, and the bowl to warm their hands on.

Recipes for cock-a-leekie appear to originate from around the 16th Century – but that was probably when they were first written down – the highlanders had likely been making it way before that. 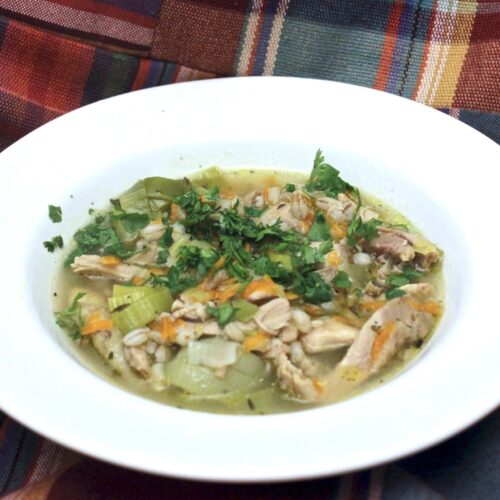 You may want to serve with some Dutch oven bread.

Beer Cornbread with Only 4 Ingredients!
Roasted Red Pepper Strips in Olive Oil
49 Authentic Scottish Recipes You Should Try
How to Make Mint Extract