British housewives have been making these delicious little cakes for centuries, but rock cakes did, at one point, fall out of favor. That is, of course, until they made an appearance in J.K. Rowling’s Harry Potter series.

In the Harry Potter series, the cakes baked by Hagrid were definitely rocklike – genuine tooth breakers, and the main characters had to force themselves to eat them.

They may not have been popular in the books, but the series did make rock cakes famous again and kids the world over were keen to try them, not as Hagrid made them but according to popular recipes.

What are Rock Cakes?

The name rock cake comes from the fact that they are shaped like little outcrops of rocks, and has nothing whatsoever to do with the texture, which should be soft and melt-in-the-mouth sweet once you bite into them.

These are a favorite little treat to have with a cup of tea or coffee and to add to kid’s lunchboxes when you want them to have a fruity sweet treat that travels well. Grown ups love them too!

The Origins of the Rock Cake

Apparently the Irish and Scottish also bake rock cakes so whether they actually originated in Britain, Ireland or Scotland is debatable. My mother was Scottish and declared them to be a Scottish treat, so mum, I’m going with your opinion.

With people travelling throughout the British Isles the recipe soon spread anyway and it is safe to call rock cakes a British treat.

It’s interesting to know that during World War II when food rationing was in place in Britain that the Ministry of Food promoted the baking or rock cakes because they used less eggs and sugar than a traditional cake but were really tasty.

A Great Introduction for Kids

Another strongpoint for these cakes is that they are also an easy project to get kids involved in baking, as the ingredients are easy to come by and the time from mixing to tasting the finished product all happens within half an hour – well within the attention span of little ones.

What makes them special is the fact that real butter and sugar are used to give them their light crumbly texture. I added icing sugar instead of castor sugar and the result was delicious!

If you don’t have castor sugar at home then put ordinary granulated white sugar into your blender and pulse for 30 seconds – and then you have castor sugar – if you let it go too long you’ll end up with a texture like icing sugar though.

Traditional recipes use a lot of refined sugars – which aren’t very good for you in large quantities – so they aren’t the healthiest treats.

With that said, there are also recipes that don’t use refined sugars and these are considered much healthier options. The typical nutritional information is as follows: 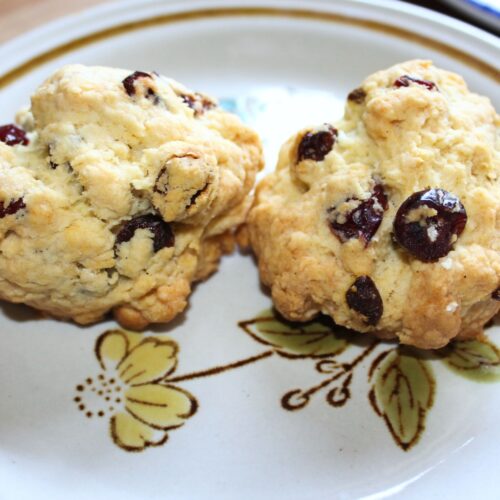 Baking wouldn’t be much fun without a touch of creativity. After all, why make a sweet treat at all if you can’t play around with the recipe a bit?

There are variations like adding a little mixed spice, nutmeg, or cinnamon to the dough, or vanilla or almond essence.

Some dried fruit includes candied peel besides the raisins and sultanas. One of the mixes I used on a batch included cranberries and goji berries.

There is also no reason you shouldn’t add a few chopped walnuts to the mix for some added crunch and flavor. Here are some more recipes from around the web.

This is a pretty easy one, instead of using sugar, use fruit or a few spoons of coconut sugar. If you’d prefer not to use any sugar, refined or otherwise, just replace the sugar with fruit. It works well and tastes great.

Cranberries are sweet, with just a touch of tartness to them so when you add the sweet & sour flavor of grapes to them…well…it’s a match made in culinary heaven.

This is an easy recipe that results in a soft, fruity cookie that your family and friends will love!

If you like grapes and you like apples, then this is the recipe for you. The two fruits work together to provide an interesting blend of flavors to your cakes. Try it for yourself, you’re not going to regret it.

How long do rock cakes last?

Typically, a rock cake will last 3 or 4 days in the fridge.

Can you freeze rock cakes?

You certainly can! They freeze well and will last a couple of months in the freezer.

What’s the difference between a rock cake and a scone?

Rock cake dough is stiffer and is dropped onto a baking sheet. It makes smaller cakes. Scone dough is softly patted and cut into shape before the scones are cooked at a higher temperature.