Corn fritters made with cornmeal are a traditional Native American dish. These fritters, however, make use of what you have grown on the homestead – succulent freshly picked sweetcorn, red peppers, cilantro, and lemon.

Add the cucumber from your kitchen garden for garnish and you’ll have most of the fresh and organic ingredients to make these wholesome and oh-so-tasty fritters.

Frying them in butter just adds to the flavor, and with the addition of lemon zest it lifts the fresh taste of these fritters to new heights. Don’t try and substitute canned sweetcorn – it just won’t taste the same!

These are great served alone or with the additional of either shaved ham, smoked salmon or small homemade beef patties for a hearty meal

If you make smaller fritters and serve with smoked salmon they make for a great addition to a cocktail platter, especially if you garnish with a blob of crème fraiche and a tiny piece of dill. 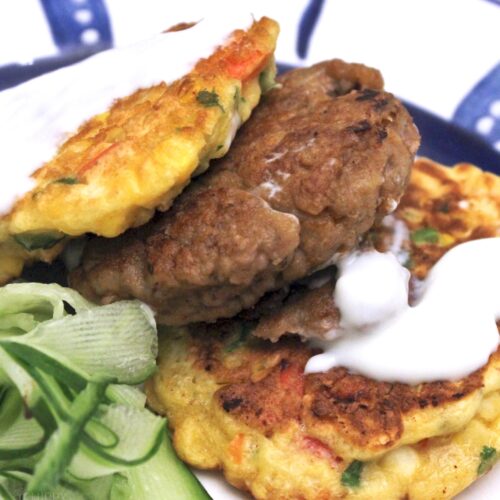 You can buy creme fraiche ready to use, or make your own by placing one tablespoon of buttermilk in a cup of double cream and leaving to stand for 12 hours at room temperature.

Refrigerate after 12 hours to prevent the bacteria in the buttermilk developing further with the cream; the mix will keep in the fridge for a couple of days.

If you don’t have buttermilk or cream you can make your own creamy yogurt dressing instead with 1/3 cup of Greek double cream yogurt to which you add 2 tablespoons of lemon juice, 2 tablespoons of olive oil, a pinch of salt, and one crushed garlic clove to make up just over half a cup of dressing.