If you are new to the adventure of DIY in the kitchen, you probably are reading all about the many toys you will need to turn your kitchen into a kitchen Gordon Ramsey himself would be jealous of.

While it is great to have a Ramsey-worthy kitchen, it is better to start with what you have and go from there.

Many of my friends have dehydrators out on their counter tops that they turned on once when they bought them and promptly decided that DIY just was not their thing and it is much more convenient to just pop in at the local for some quality jerky.

With the carnivores in my tribe, my dehydrator gets used a lot! But truth be told, I started in the exact same way that I am going to lay out for you in this article. I started making my jerky in the oven.

It is too easy to think, making jerky in the oven at low heat over a period of many hours takes too long, so why not hike the heat up to speed up the process. Well, there are a number of reasons:

So, take your time; assess as you go along how your meat is doing; and remove it when it is to your taste – the longer it goes the drier the jerky will be.

What You Will Need

Cuts of Meat That Work Well

The truth is that any cut will work. The key when it comes to buying the meat is to always go lean!

If there is fat on the meat it will not dehydrate well because the fat will constantly moisten the meat, fat does not dehydrate at the same rate as meat, and most importantly, when fat breaks down it will break the meat down with it causing the meat to rot very quickly.

I like to use lean, tenderized steak – normally store bought with an eye on a full steak dinner but then usurped and reallocated as meat for making jerky.

The reason I go with tenderized is that it really allows the flavor of the marinade to get deep into the meat making it taste spectacular, and also the cure gets in deep making the meat last longer.

To tenderize the meat yourself you can either pound on it with a tenderizer or you can cut slices into the surface of the meat.

You can use flank steak, top- or bottom round, sirloin tip, or eye of round. You can tenderize any of these yourself too.

Thinly sliced meat, strips of meat, or sheets of meat work best in terms of time. The thicker the meat, the longer it will take to dehydrate.

Try to stick with cuts that are ⅛ to ¼ inches thick.

If you are going to slice the meat thinly yourself, I recommend flash freezing it first until the outside is frozen, but the inside is still soft. This just makes it easier to slice thin, even slices.

I had an oven once that did not cooperate well with temperature control. It only had one temperature: HOT. What I did with that oven was, I just left the door open. If you have Golden Retrievers, this is obviously not a good plan, as your dogs will get hurt, and you will not have jerky for yourself.

If the oven stays much too hot, leave it open about a third, if you just want to bring the temp down a little, leave the door open just a crack.

Preparing your meat properly involves more than just slapping it on the baking tray and sticking it into the oven. Your jerky’s flavor all comes from good preparation.

You will want to create a really good marinade, and let the meat sit in the marinade for at least an hour in the fridge. I normally let mine sit overnight to really get those flavors deep into the meat.

Your base marinade should always have either vinegar, soy sauce, or Worchester sauce, or any combination of these, and salt. These are your basic preservatives. They will ensure that the taste lasts, and that the meat does not break down.

Once you have your base you can add your own spices.

You will notice that I do not give very specific amounts for the ingredients.

This is partly because I never measure, I always just throw in what I like, but it is mostly because the amount of marinade you make should be in relation to how much meat you are going to be dehydrating.

If you have a good quality marinade dish with grooves on the top and bottom, you will require less marinade (enough to just cover a tiny bit higher than the grooves so that the meat just touches the marinade) than if you use a zip lock bag.

The key is to regularly flip the marinade dish or shake up your Ziploc bag rubbing the sauce into the meat.

If you like sweet jerky, you should use soy sauce, Worchester sauce, salt, and brown sugar, honey, or maple syrup. Sweet jerky should be a little sticky on the outside.

We prefer savory over sweet; I use a lot of salt, black pepper, onion pepper, cayenne pepper, paprika, and – occasionally – chili pepper for my son. Many people add garlic powder. Personally, if old Gordo wants garlic, he can find it in his own kitchen!

Many butchers and specialty stores sell a premix of spices specifically for making jerky. But always remember your preservative layer (the sauce and salt).

If you are going with savory jerky, I highly recommend that you freshly grind some black pepper over the meat before you place it in the oven.

Your meat is cured and spiced, your oven is warm, so now what?

Drain the marinade off of your meat. Try to remove as much as possible.

I let mine sit on my cooling rack for five minutes per side over the marinade dish (any container or plate to catch the sauce will do); you can also use paper towels to squeeze off the extra moisture – I prefer letting mine drain because that way I do not lose any of my spices.

Prepare your baking tray by lining it with foil. Place the raw meat on a metal rack on top of the foil leaving sufficient space between each piece – they should not be touching each other.

Place the tray on the top shelf in the oven.

The time needed to dehydrate the meat will depend on the thickness of the meat and on your preference – the drier you like it the longer you will want to leave it in the oven.

Very thin sheets of meat will take 3 – 4 hours to properly dry, but you can leave it for longer depending on your preference.

Tenderized Steak, Dry with a Little Moisture in the Center – 12 Hours Oven Time:

You will know that the meat is ready if it feels dry, if it is not spongy at its thickest spot, and if it is still flexible when you bend it.

I don’t recommend that you leave it too long in the oven as meat that has been left too long will taste rubbery – you do not want to have pieces that snap in half if they are bent.

If you want a quick fix, use minute steaks, thin slices, or shaved meat. These are very quick to dehydrate – they can be given a half hour in marinade and about 2 ½ – 3 hours in the oven:

Here is my own sweet jerky recipe:

Step 1. Mix all of the ingredients together to make marinade.

Step 2. Trim off all the visible fat.

Step 3. Place the meat into the marinade.

Step 4. Rub the mixture into the meat thoroughly on both sides.

Step 5. Leave the meat in the fridge over night (it needs at least an hour to absorb the flavors of the spices; the longer you leave it the better it will taste, but up to 24 hours max).

Step 6. Drain the marinade off the meat.

Step 7. Turn the oven on to its lowest temperature setting.

Step 8. Place the meat on a wire rack above a baking tray lined with foil.

You can place it straight onto the foil, but I find the meat tries to cook itself in the juice and it does not dry equally on both sides, as you can see below:

Step 9. Place the tray on the top shelf in the oven for 3 – 4 hours (up to 12 hours for thicker cuts of meat) turning the meat after 2 hours.

Note: I use meat that has already been cut thin by my butcher; this is just for convenience. If you want to cut your own, freeze it partially (until the outside is frozen but the inside is soft – this makes it easier to cut).

For sweet jerky I recommend using very thinly sliced beef. It dries quickly, and does not become overly sweet.

For very thick jerky (about 2 pounds), I increase my volumes by at least ½ and I let it sit overnight in the fridge. The dehydration will take 8 – 12 hours depending on the thickness and your preference.

Ready To Make Some Jerky?

You don’t need anything fancy to make your own jerky. As you go, you will find yourself becoming more adventurous with your spices, and you will get the hang of how long it takes to get your meat dried to your own tastes. 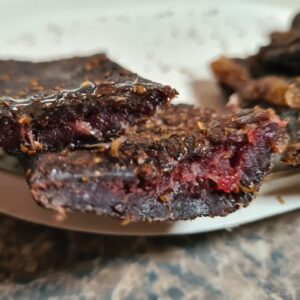 Do not be shy with your salt. Salt cures, preserves, and it gives jerky its distinctive taste (even for sweet jerky). ENJOY!

Di-Anne Devenish Seebregts was raised in an environment where daily life consisted of hiking, environmental conservation, growing fruit and vegetables, and raising poultry for meat and eggs.

She combined her passion for the writing word with her love of the pride that comes with not relying on others. She raised three children (who are now adults) to value the environment, and understand the value of being self-sufficient.